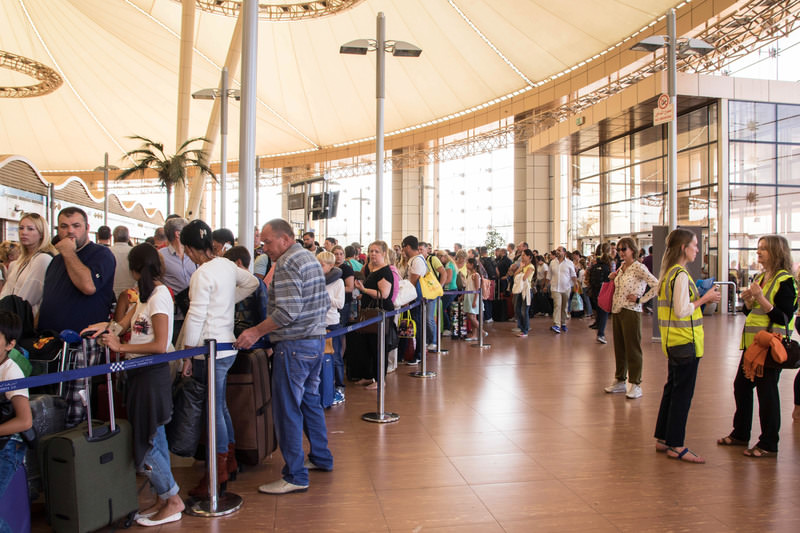 by Daily Sabah with Agencies Nov 08, 2015 12:00 am
The airport security in Egypt, including in the Sinai resort town of Sharm el-Sheikh, has long seen gaps such as lack of baggage scanning devices, lax searches at an entry gate for food and fuel for the planes and accepting bribe in return of helping passengers bypass the security control, security officials and passengers reported.

Security at the airports in Egypt have become a central concern as investigators probe the Oct. 31 crash of a Russian plane 23 minutes after it left Sharm el-Sheikh, killing all 224 on board. The U.S. and Britain have said the cause was likely a bomb planted on the flight, as Russia and Britain have halted flights to Egypt until security at airports is improved.

Russian Deputy Prime Minister Arkady Dvorkovich said that Russia was sending a number of experts to inspect Egypt's airports to see if security needed to be beefed up there.

Seven officials involved in security at Sharm el-Sheikh airport, several for more than a decade, told the AP of the gaps, speaking on condition of anonymity because they were not authorized to talk to the press. Several said the malfunctioning scanner had been noted in security reports to their superiors, but the machine was not replaced.

One of the officials, involved in security for planes, also pointed to bribe-taking by poorly paid policemen monitoring X-ray machines. "I can't tell you how many times I have caught a bag full of drugs or weapons that they have let through for 10 euros or whatever," he said.

Some passengers also reported their experinces regarding the lack of security at the Egyptian airports.

Al-Arabiya recently reported that an Egyptian woman living abroad said there are cases in which staff at Cairo International Airport ask a passenger to pay a bribe to allow for extra luggage.

According to Sky News, British passenger, who visited Sharm el-Sheikh with his wife earlier this year, said he was approached by an official in "military uniform" who offered to help him jump the queue for only 20 pound.

"We walked right through the security gates and security procedure, straight through the airport, avoided all the queues, and then he put the case on the conveyor belt and the girl checked us in. At no point did my luggage go through any scanner. When I think now it was bizarre."

Egyptian government officials did not respond to repeated calls for comment. Egyptian President Abdel-Fattah el-Sissi has said British officials sent a security team to evaluate the airport 10 months ago, in cooperation with Egyptian officials, and were satisfied with the results.

A spokesman for Britain's Department of Transportation would not comment on any details of what the team found. But British Transport Secretary Patrick Mcloughlin suggested on Friday that screening of checked-in bags was insufficient, telling the BBC that it had imposed its own additional checks on its flights "because we weren't wholly satisfied with the way screening had been done."

All bags are put through a scanner as passengers enter Sharm airport, and carry-on bags go through a second machine at the gate before boarding.

But a scanner in the sorting area for checked-in bags often is not working, all the airport officials speaking to AP said.

One of the officials said the breakdowns in the 10-year-old CTX scanner were because operators didn't use it properly "human stupidity," he said rather than technical faults.

"I have seen people unplug it to save power," he said, laughing.

Another of the officials said the staff made sure the scanner was operating well enough whenever international experts came to review measures at the airport.

"We only care about appearances," he said. "Once they (higher-ups) hear something is coming, suddenly everything gets fixed. ... We wish we had visits every day."

Several of the officials argued that it was "not that important" that the machine broke down because when it was working, it is only used to scan a sample of the bags, not all of them.

The scanner was one of at least five granted by Britain, and another scanner is used at Cairo's airport but only to scan luggage for flights to London and Paris, according to two security officials there. In Sharm el-Sheikh, the selective use of the scanner is even more arbitrary.

On Friday, Russia suspended all flights to Egypt, joining Britain, which had halted flights to Sharm el-Sheikh. Ireland has also suspended flights to the Red Sea resort, while at least a half-dozen Western European governments told their citizens not to travel there.

Empty charter planes have been flying to Sharm el-Sheikh to bring home stranded Russian and British tourists. But these flights banned passengers from checking in luggage, suggesting a concern about security and luggage-screening procedures.

Egyptian authorities at Sharm el-Sheikh airport have begun questioning airport staff and ground crew who worked on the Russian flight and have placed some employees under surveillance, according to airport and security officials.

The officials from Sharm el-Sheikh airport said security checks were often lax at a gate into the facility used to bring in food and fuel. Local hotels provide food to some flights and deliver the food directly to the planes, they said.

Guards at the gate often let such deliveries go in without full searches because they know the delivery men, the officials said. Guards in a diligent mood are often bribed with a meal or two to pass the trucks unsearched to save time, they added.

"You are not going to search your friend or your friend's friend," one official said. "It's rude."

A retired senior official from Egypt's Tourism Ministry, Magdy Salim, said airport guards regularly skip security checks for friends and co-workers and often don't search people "out of respect to save their time if they look chic or if they come out of a fancy car."

"Airport security procedures in Egypt are almost (all) bad" and marred by "insufficiencies," Salim said.

Earlier Saturday, the head of the joint investigation team, Ayman el-Muqadem, said a noise was heard in the last second of the cockpit voice recording before the plane plummeted. The announcement bolstered U.S. and British suspicions it was brought down by a bomb.

However, el-Muqadem warned it was too early to say what caused the plane to apparently break up in mid-flight, adding that analysis of the noise was underway.

"All scenarios are being considered ... It could be lithium batteries in the luggage of one of the passengers, it could be an explosion in the fuel tank, it could be fatigue in the body of the aircraft, it could be the explosion of something," he told reporters at Cairo press conference.