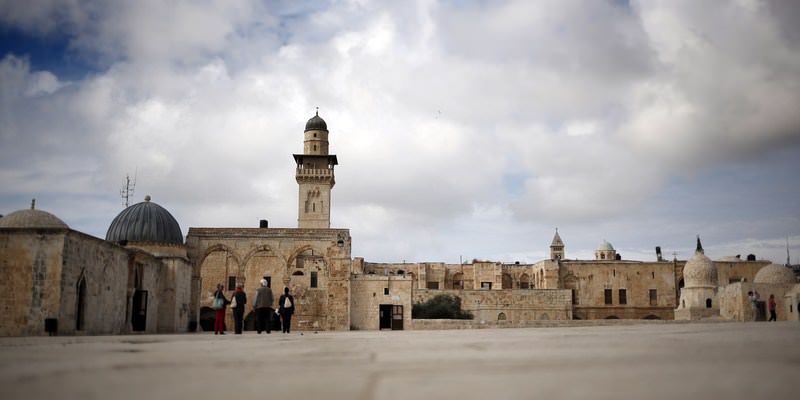 Picture shows the Al-Aqsa mosque compound in Jerusalem on October 28, 2015. (AFP Photo)
by Anadolu Agency Nov 09, 2015 12:00 am
Although tensions have recently subsided at East Jerusalem's Al-Aqsa Mosque complex, many Palestinians fear that "partition" of the site between Muslims and Jews remains a long-term Israeli objective.

The current round of violence in the Israeli-occupied West Bank -- in which scores of Palestinians have been killed so far -- was initially triggered by a series of clashes in the Al-Aqsa Mosque complex, regarded as sacred to both Jews and Muslims.

Those clashes were largely precipitated by large groups of Jewish settlers who -- usually accompanied by Israeli security forces -- frequently forced their way into the mosque compound.

While Jewish settlers have been allowed into the Al-Aqsa compound in greater and greater numbers -- where they often perform "Talmudic rituals" despite a longstanding ban on non-Muslim worship -- the entry of Palestinian Muslim worshipers to the site has been increasingly restricted by the Israeli authorities.

According to Sheikh Ikrima Sabri, head of the Supreme Islamic Council and former Mufti of Jerusalem, the twin moves -- allowing large numbers of Jews into Al-Aqsa while barring Muslims -- is part of an Israeli plan to "partition" the site "temporally and spatially" between worshippers of the two faiths.

From the Israeli occupation of Jerusalem in 1967 until 2000, Jerusalem's Department of Islamic Endowments -- run by next-door Jordan -- has been solely responsible for the Al-Aqsa Mosque compound and for regulating visits to the site by non-Muslims.

In September of 2000, a visit to Al-Aqsa by controversial Israeli leader Ariel Sharon -- accompanied by a large delegation and hundreds of Israeli riot police -- sparked what later became known as the "Second Intifada", a years-long popular Palestinian uprising against the Israeli occupation.

In the wake of Sharon's contentious visit, the Department of Islamic Endowments banned visits to the site by non-Muslims.

In 2003, however, the Israeli government unilaterally decided -- despite the objections of the Islamic Endowments Department -- to allow non-Muslim visitors into the mosque complex.

Since then, under increasingly right-wing Israeli governments, extremist Jewish settlers have been allowed into the site in ever greater numbers -- usually protected by Israeli security forces -- while Palestinian access to the site has become increasingly restricted.

For Muslims, Al-Aqsa represents the world's third holiest site. Jews, for their part, refer to the area as the "Temple Mount", claiming it was the site of two Jewish temples in ancient times.

Those who warn of an Israeli plan to partition Al-Aqsa between Muslims and Jews point to the case of the Ibrahimi Mosque in the West Bank city of Hebron (Al-Khalil), where such a plan has been successfully implemented.

In the early 1990s, Jewish settlers began visiting the mosque -- which they revere as the "Tomb of the Patriarchs" -- in increasing numbers, leading to occasional clashes with Palestinian Muslim worshippers.

Then, on Feb. 25, 1994, extremist Jewish settler Baruch Goldstein walked into the mosque and opened fire on Muslim worshipers performing dawn prayers. Twenty-nine Palestinians were killed in the carnage, sparking large demonstrations across the Palestinian territories.

The Israeli government condemned the act, but nevertheless seized the opportunity to partition the mosque complex between Muslims and Jews -- an arrangement that remains in place until now.

"The Palestinian side has called on Israel to maintain the status quo at the mosque," Ahmed Qurei, who is responsible for the Jerusalem file at the Palestine Liberation Organization, told Anadolu Agency.

"This not only means refraining from dividing Al-Aqsa temporally and spatially between Muslims and Jews, but also forbidding Jewish settlers from staging incursions into the site," he added.

According to Qurei, Netanyahu's recent pledges to maintain the status quo "have not stopped scores of Jewish settlers from forcing their way every day [into the mosque compound] under the protection of the Israeli police and army".

He added: "We believe Israel aims to divide the Al-Aqsa Mosque? by allowing Jewish settlers to make tours [of the mosque compound], and some of these settlers attempt to perform Talmudic rituals."

The Ramallah-based Palestinian Authority, he said, "will not allow Israel to divide Al-Aqsa, which is a part of our Muslim heritage and will remain so".

According to Najeh Bkierat, head of the Al-Aqsa Mosque's manuscripts department, Israel has three goals regarding Al-Aqsa.

The first, he said, is to lay siege to the site by setting up security checkpoints and confiscating surrounding property, while the second is to divide the mosque compound itself "temporally and spatially" between Muslims and Jews.

The final objective, Bkierat said, echoing a common fear, was to build a Jewish "Third Temple" on the site where the Al-Aqsa Mosque currently stands.

Bkierat, however, went on to assert that Israel would ultimately fail to do at Al-Aqsa what it did at Hebron's Ibrahimi Mosque, stressing Al-Aqsa's enormous importance for Muslims worldwide -- and the massive resistance such a move would engender.
Last Update: Nov 09, 2015 9:32 pm
RELATED TOPICS