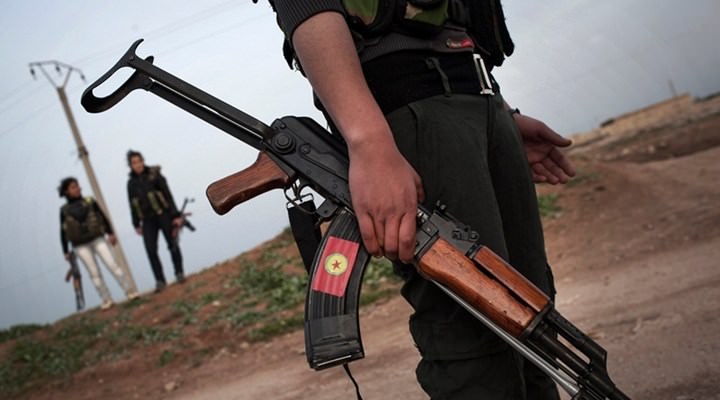 by daily sabah
Nov 11, 2015 12:00 am
Syrian Christian communities living in northern Syria have accused the PKK-affiliated Democratic Union Party (PYD) of seizing private property belonging to their community, unlawful taxation and forced military recruitment. Meanwhile, many Western volunteers who joined the ranks of PYD's armed People's Protection Units (YPG) to join in its fights against the Islamic State of Iraq and al-Sham (ISIS), have reportedly left the organization because of its Communist-Marxist ideology. According to foreign fighters quoted by Agence France-Presse (AFP), an exodus is currently underway of American and other Western volunteers from the YPG due to its left-wing stance.

The agency quoted on U.S. army veteran, referred to as "Scott," as saying that he decided not to join after finding out they were a "bunch of damn Reds." Another British volunteer named Alan Duncan also said he had left the YPG because of their leftist views and said he knew a number of other people were planning to leave soon for the same reason.

Sixteen Christian minority groups in the northeastern Syrian governorate of Hasakah, located along the Turkish border, signed a joint statement condemning the PYD for seizing their property after the region was captured from ISIS terrorists this summer.

The latest case highlights the plight of Christian minorities living under the PYD. In a statement published in English by the Assyrian International News Agency (AINA) on Nov. 2, a Christian organization mainly of local Assyrian and Armenian groups in the Qamishli district of Hasakah, called on the PYD to uphold human rights and abandon regulations that have resulted in the confiscation of property belonging to Christians who fled the area.

The statement criticized new property laws introduced by PYD authorities as "redundant," "illegal," and an "attempt to expropriate real estate under a guise of helping those in need," as well as being "in violation of human rights law." It also criticized the practice of labeling those who fled their homes to escape violence as "traitors," while mentioning that almost 35 percent of all real estate in the area belongs to Christians who have neither sold their properties nor appointed proxies for them.

"Expropriation of these properties will cause valid concerns for both those who stayed and fled, preventing the latter from ever coming back," it said.

The statement also condemned forced military conscription by the PYD as "preposterous" and interference in the curriculum offered by private church schools as "unacceptable."

Amnesty International recently released a report, showing human rights violations by the YPG concerning non-Kurdish inhabitants in areas under their control in northern Syria, including forced displacement and demolishing houses.The Amnesty report says that the crimes committed by the YPG amount to war crimes and that non-Kurdish, mostly Turkmen and Arab, inhabitants of villages in the de facto autonomous Kurdish administration were forced out of their homes.

Amnesty quotes Ciwan Ibrahim, the head of the Kurdish internal security force known as Asayish, in the report admitting there had been forced displacements, but that they were "isolated incidents" and that civilians had been moved "for their own safety." However, the report says that the findings show the forced displacement mostly concerns non-Kurdish villages captured by the YPG.

Amnesty interviewed 37 individuals who said they had experienced YPG abuse in Hasakah and Raqqa provinces.

Faced with the possibility of an investigation following the war crimes allegations, the YPG is also accused of extrajudicial detainment, killings and using child soldiers. According to Human Rights Watch: "The Kurdish armed group that controls territory in northern Syria, despite some progress, is still not meeting its commitment to demobilize child soldiers and to stop using boys and girls under 18 in combat."
Last Update: Nov 11, 2015 2:21 am