Does the UK’s cozying up to Egypt’s Sissi, indicate a state of total confusion about human rights? 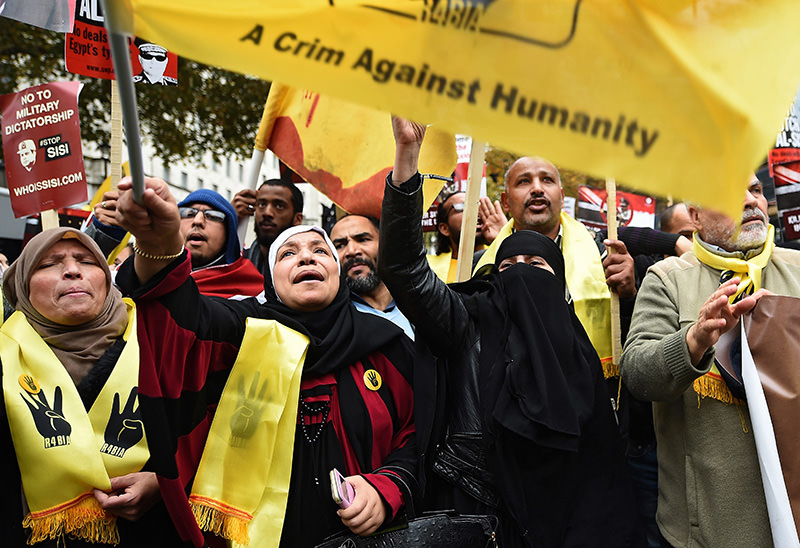 Demonstrators protest against the visit of Egyptian President Abdel Fattah al-Sissi to Downing Street in London, Britain, 05 November 2015 (EPA photo)
by Anadolu Agency Nov 12, 2015 12:00 am
Six months after the U.K.'s foreign secretary, Philip Hammond, led a British delegation of investors to Sharm el-Sheikh to strengthen relations with Egypt, the country's onetime junta leader and current President Abdel Fattah el-Sissi -- who is yet to hold a democratic election -- received the red-carpet treatment in London last week.

The British business mission in March succeeded as U.K. oil giant BP was quick to secure a £7.8 billion ($11.8 billion) investment deal in the Nile delta.

Thousands of people in London protested against Sissi's visit to the U.K, as he is known as the architect of one of the bloodiest coups in this decade. The country's first democratically elected president, Mohamed Morsi, and hundreds of members of Muslim Brotherhood -- the ruling party before the military took over -- have been sentenced to capital punishment and await their fates in Egypt's prisons.

Human rights organizations and NGOs, on the other hand, have been vocal in criticizing Prime Minister David Cameron's Tory government for receiving a visit from a coup leader who many see as guilty of gross human rights violations.

Individuals who reportedly dared to wave the Tibetan flag as Xi's convoy went past were detained by the police. Security forces also arrested a Tiananmen Square massacre survivor who tried to protest against the Chinese leader.

During Xi's visit, Britain managed to secure business and energy deals with China.

Now some experts are claiming that the protesters who were trying to be heard and to make a statement against human rights violations in China were not allowed free expression in a country that describes itself as the world's most advanced democracy.

Professor of Human Rights Law, Conor Gearty, of the London School of Economics, described the U.K.'s attitude as a "double standard".

"The U.K. is in a state of total confusion about human rights. The Foreign Office has strongly pushed a human rights agenda abroad, while the government at home has attacked human rights insofar as they have affected either its ability to engage in military aggression abroad or its capacity to act at home," he told Anadolu Agency.

Gearty claims this has led to a "collapse" by the British government: "This contradictory position, rooted in double standards, has been impossible to maintain. Hence the U.K. collapse before the Chinese, and its ongoing defense of Egypt and other human rights abusing nations with which it is commercially involved."

This week Britain is getting ready for another high level visit, this time from Indian premiere Shri Narendra Modi who also faces harsh criticism as well regarding human rights violations and abused minority rights in one of the two most populated countries of the planet.

Celebrations and protests for Indian Prime Minister Narendra Modi's visit are already underway in the U.K. capital. A huge pro-Modi rally will be held at England's historic Wembley Stadium.

As the protests fell on deaf ears during the visits of the presidents from Egypt and China, the same is expected during the Indian prime minister's trip here. The U.K. has managed to strengthen business and trade ties with three important partners within the space of just two months, despite activists' calls to take action against human rights violations.

Osama Mohamed Morsi, the son and lawyer of Egypt's ousted president, says Britain contradicts itself on human rights and democratic values when it accepted a visit from Sissi:

"I think Mr Cameron has gone the wrong way by shaking hands with a criminal, a coup leader, a killer and a violator of human rights. I think these mistaken actions do not jibe with British democratic values," he told Anadolu Agency.
Last Update: Nov 12, 2015 1:10 pm
RELATED TOPICS