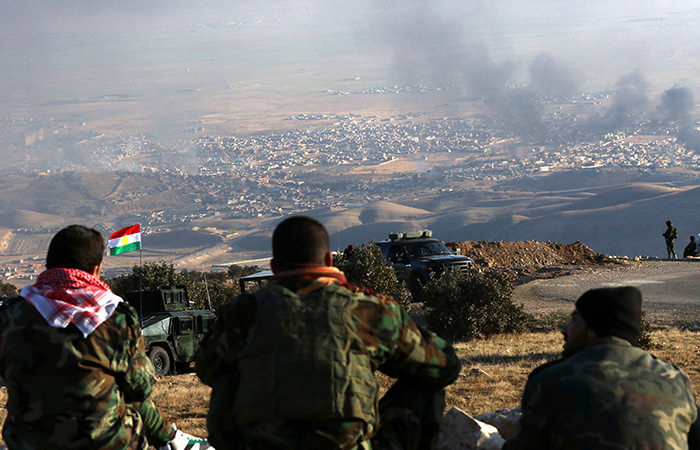 Iraqi Peshmerga fighters look on as smoke billows during an operation in the northern Iraqi town of Sinjar on November 12, 2015 (AFP Photo)
by Compiled from Wire Services
Nov 13, 2015 12:00 am

Thanks to a U.S. backed major operation to recapture the strategic town of Sinjar from ISIS militants, KRG President Massoud Barzani announced that Peshmerga entered the town

Iraqi Kurdish militias battling to take back Sinjar from Islamic State of Iraq and al-Sham (ISIS) militants raised a Kurdish flag in the center of town and a top official said it was liberated Friday, though U.S. and Kurdish military officials urged caution in declaring victory in a major offensive to retake the strategic community. The Kurdish forces encountered little resistance, at least initially, suggesting that many of the ISIS fighters may have pulled back in anticipation of Friday's advance. It was also possible that they could be biding their time before striking back.

Kurdish militia fighters known as peshmerga launched a major offensive to retake Sinjar and succeeded in cutting a key nearby highway on Thursday. U.S.-led coalition airstrikes supported the offensive, dubbed Operation Free Sinjar. The town has been under the control of ISIS for more than a year. The town was overrun by the extremists as they rampaged across Iraq in August 2014, leading to the killing, enslavement and flight of thousands of people from the minority Yazidi community.

"We promised, we have liberated Sinjar," Massoud Barzani, the president of the semi-autonomous Kurdish region, told fighters in Sinjar. "It's time for the Yazidi girls to raise their heads up. Revenge has been taken for them." "Sinjar is very important because it's become a symbol of injustice against the Kurdish people," he added.

Peshmerga Maj. Ghazi Ali, who oversees one of the units involved in the offensive, said thousands of Kurdish fighters entered the town from three directions Friday morning. Associated Press journalists saw them raise a flag over a building in the center of the city. They encountered minimal resistance during Friday's push, Ali said. "No one was fighting back. They placed some IEDs and had some snipers in position, but there were no clashes," he said, using the abbreviation for improvised explosive devices, a military term for homemade roadside bombs. Gunfire fell silent as peshmerga fighters marched into the town. He described the situation in the city as still dangerous, however, and warned that it was too soon to declare victory. "I can't say the operation is complete because there are still threats remaining inside Sinjar," he said. The risks include ambushes from suicide bombers, roadside bombs and booby-trapped houses, he added.

Iraq's highest Shiite religious authority, Ayatollah Ali al-Sistani, praised peshmerga fighters in his Friday sermon for their efforts to capture Sinjar from the Sunni militant group. Col. Steven Warren, a spokesman for the U.S.-led coalition, confirmed only that peshmerga fighters raised their flag on grain silos in the eastern part of the town. He said they had not fully retaken Sinjar.

U.S. Secretary of State John Kerry said on Friday he was "absolutely confident" the Iraqi town of Sinjar would be retaken. "There are some entrenched ISIS fighters, but we are absolutely confident that over the next days Sinjar will be able to be liberated," Kerry said during a visit to Tunis.
Meanwhile, Iraq's military said on Friday its forces had advanced on three fronts to begin clearing ISIS militants from the western city of Ramadi, which security forces have been encircling for months. A municipal official and a police officer at a nearby military base, however, said the advance had not yet begun. Reuters could not independently verify the opposing accounts, due to insecurity and poor communication in the area.
Last Update: Nov 13, 2015 10:44 pm