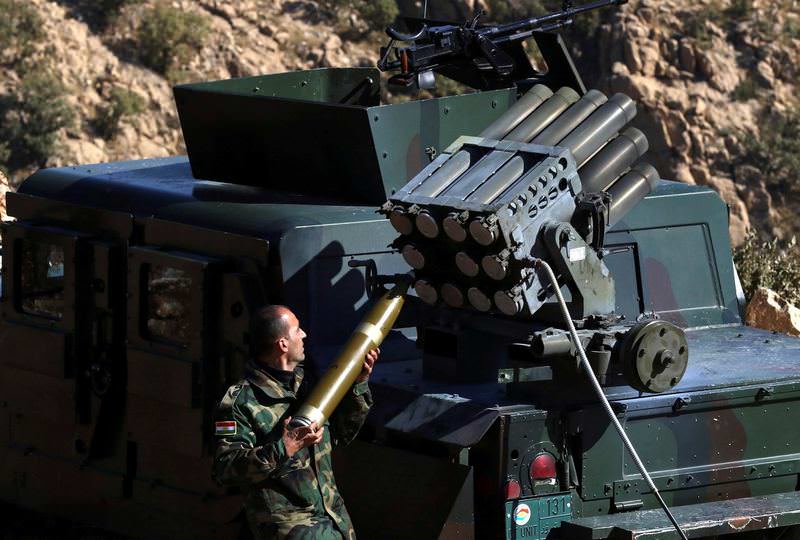 Peshmerga take part in an operation backed by US-led strikes in Sinjar to retake the town from ISIS.
by Daily Sabah with Wires
Nov 13, 2015 12:00 am

Iraqi Kurdish forces along with armed Yazidi groups have launched a ground operation backed by U.S. airstrikes to retake Sinjar from ISIS as the town is strategically important for binding Mosul and Raqqa, ISIS's two main strongholds

In an offensive air strikes backed by the U.S.-led coalition, Kurdish Iraqi Peshmerga fighters launched an assault on the strategic town of Sinjar on Thursday aiming to retake the town from ISIS militants which had captured it last year, resulting in thousands of Yazidis to flee. A statement from the Kurdish Regional Security Council said some 7,500 Peshmerga fighters were closing in on the mountain town from three fronts in an effort to take control of the town and cut off a strategic supply line used by ISIS extremists. Peshmerga fighters and ISIS fighters exchanged heavy gunfire in the early hours Thursday as Kurdish fighters began their approach. "(Peshmerga) troops are holding their position, waiting for reinforcements and more airstrikes so they can then move into the center of the town. Airstrikes have been very important to the operation getting to the point where it is now," said Maj. Gen. Seme Busal, commander of one of the front lines. He said Peshmerga fighters were in a similar position on the other front lines, waiting for reinforcements or more airstrikes in order to push into the more urban areas of Sinjar. Capt. Bawer Azad on the central front line said the troops were coordinating their movements, "We are updating each other on the location and who is making advances where and who is in what place." Capt. Ramazan Sanaan, commander of a base atop a mountain overlooking the town said he and his men were waiting for peshmerga units on the eastern and western approaches to the town to cut off the main supply road in and out of Sinjar before they move in. "Actually it's going very slow," he said.

The major objective of the offensive is to cut off one of ISIS's most active supply lines, Highway 47, which passes by Sinjar and indirectly links the militants' two biggest strongholds Raqqa in Syria and Mosul in northern Iraq as a route for goods, weapons and fighters. "If you take out this major road, that is going to slow down the movement of (ISIS's quick reaction force) elements," Capt. Chance McCraw, a military intelligence officer with the U.S. coalition, told journalists Wednesday. "If they're trying to move from Raqqa over to Mosul, they're going to have to take these back roads and go through the desert, and it's going take hours, maybe days longer to get across," Capt. McCraw said.

Warplanes in the U.S.-led coalition have been striking around Sinjar ahead of the offensive and strikes grew more intense at dawn Thursday as bombs pounded targets outside the town. But Sinjar, located at the foot of Sinjar Mountain about 30 miles (50 kilometers) from the Syrian border, is not an easy target. One attempt by the Kurds to retake it stalled in December. The militants have been reinforcing their ranks in Sinjar recently in expectation of an assault, since "this operation has been building for a while," Maj. Michael Filanowski, operations officer for the U.S.-led coalition, said Wednesday, though he could not give specifics on the size of the ISIS militants there.

The Kurdish Regional Security Council said its fighters have captured a strategic road near the town of Sinjar, cutting off one of the most important supply routes for ISIS. The council said Thursday that peshmerga fighters have reached Highway 47, which indirectly links the militant group's two biggest strongholds Raqqa in Syria and Mosul in Iraq. The statement said the Kurds reached the highway in two different areas.

Iraqiyya state television, meanwhile, says that Kurdish peshmerga have reached the mayor's office in the town of Sinjar as part of their offensive to recapture the mountain town in northern Iraq.

Sinjar was captured by the ISIS group in August 2014 shortly after the extremists seized Iraq's second-largest city, Mosul, and blitzed across northern Iraq. Sinjar is both a symbolic and a strategic prize, sitting astride the main highway linking the cities of Mosul and Raqqa, ISIS's bastions in Iraq and Syria.