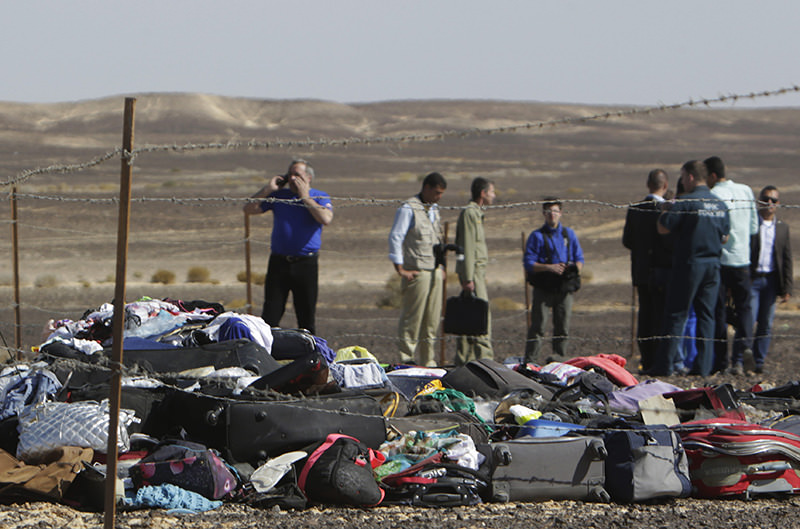 Russian investigators stand near debris, luggage and personal effects of passengers (AP photo)
by reuters
Nov 17, 2015 12:00 am
The Kremlin said for the first time on Tuesday that a bomb had ripped apart a Russian passenger jet over Egypt last month and promised to hunt down those responsible and intensify its air strikes on DAESH terrorists in Syria in response.

Until Tuesday, Russia had played down assertions from Western countries that the crash, in which 224 people were killed on Oct. 31, was a terrorist incident, saying it was important to let the official investigation run its course.

But in a late night Kremlin meeting on Monday three days after the gunmen and bombers killed 129 people in Paris, Alexander Bortnikov, the head of Russia's FSB security service, told a meeting chaired by President Vladimir Putin that traces of foreign-made explosive had been found on fragments of the downed plane and on passengers' personal belongings.

"According to an analysis by our specialists, a homemade bomb containing up to 1 kilogram of TNT detonated during the flight, causing the plane to break up in mid air, which explains why parts of the fuselage were spread over such a large distance," said Bortnikov.

"We can unequivocally say it was a terrorist act," Bortnikov said in footage that was not released until Tuesday morning.

Putin responded by saying the incident was one of the bloodiest acts in modern Russian history and ordered the Russian air force to intensify its air strikes in Syria in response.

"It (our campaign) must be intensified in such a way that the criminals understand that retribution is inevitable," said Putin.

Ordering the country's secret service to hunt down those responsible for blowing up the plane, he said the effort to bring them to justice should be exhaustive.

"We will search for them everywhere wherever they are hiding. We will find them anywhere on the planet and punish them," Putin said.
Last Update: Nov 17, 2015 11:15 am