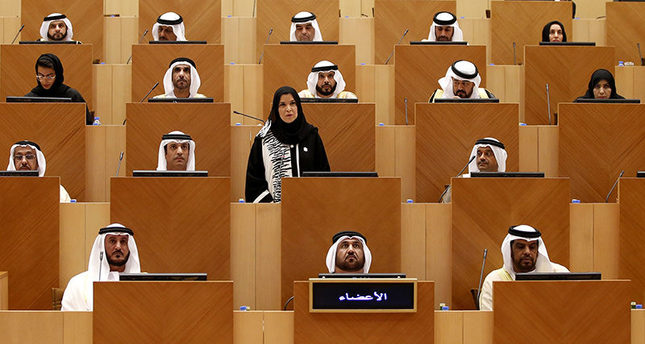 by Anadolu Agency
Nov 18, 2015 12:00 am
Amal al-Qubaisi was appointed parliamentary speaker in the United Arab Emirates (UAE) on Wednesday, making her the first woman in the Arab world to hold the post, according to the UAE's official news agency.

Al-Qubaisi, who holds a PhD in engineering, was appointed a member of parliament in October.

She then won a majority of votes in elections for the speaker's post in the assembly's first session.

October's parliamentary polls in the UAE had featured 76 female candidates, according to the country's official electoral commission, only one of whom was elected.

The UAE's parliament, called the Federal National Council (FNC), consists of 40 members, half of whom are directly elected via popular vote.

The other half are directly appointed by the country's rulers.

Headquartered in Abu Dhabi, the council plays an "advisory" role in the country's legislative process.

Draft laws are submitted to the FNC for review and/or amendment by the UAE's council of ministers. If approved, proposed legislation is then referred to the Federal Supreme Council for ratification.