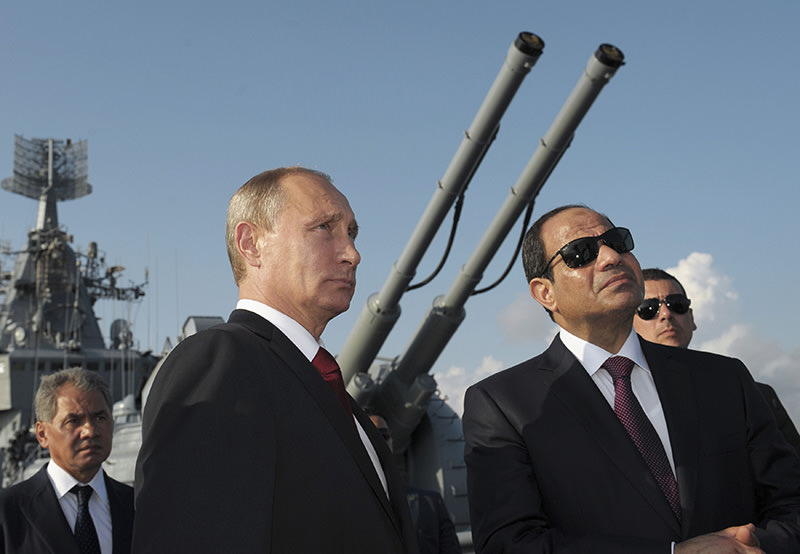 Russian President Vladimir Putin (left) with Egypt's Abdel Fettah al-Sisi (right) (Reuters Photo)
by Daily Sabah with Reuters
Nov 19, 2015 12:00 am
Moscow and Cairo signed an agreement on Thursday for Russia to build a nuclear power plant in Egypt, with Russia extending a loan to Egypt to cover the cost of construction.

A spokesman for Russia's state-owned nuclear firm Rosatom said the plant, Egypt's first, would be built at Dabaa in the north of the country and was expected to be completed by 2022.

Egypt's Abdel Fattah al-Sisi, speaking on state TV, gave few details but said the project would involve the building of a 'third-generation' plant with four reactors.

It is not clear how much the deal is worth but Sisi said the loan from Russia would be paid off over 35 years.

"The country and the balance sheet will not bear the cost of building this plant. It will be paid back through the actual production of electricity that will be generated by this plant," he said.

Rosatom said in October that it was in the final stages of negotiating the deal, which it expected to be completed by the end of the year. Egypt has been considering a nuclear plant at Dabaa on and off since the 1980s.

But Cairo froze its nuclear plans after the 1986 Chernobyl disaster and only announced in 2006, under former President Hosni Mubarak, that it intended to revive them. Mubarak was then overthrown in a revolution in 2011.

Sisi said in February that he had signed a memorandum of understanding to go ahead with the nuclear project.

Egypt, with a population of 90 million and vast energy requirements, is seeking to diversify its energy sources. As well as a nuclear plant, Sisi has talked of building solar and wind energy facilities in the coming three years to generate around 4,300 megawatts of power.

The country also recently discovered a large reserve of natural gas off the Mediterranean coast.

Despite the bad record of human rights violations condemned by many human rights groups, Sisi has been supported militarily by the Western world.
Last Update: Nov 20, 2015 9:59 am