Saudi women vote for the first time in landmark election 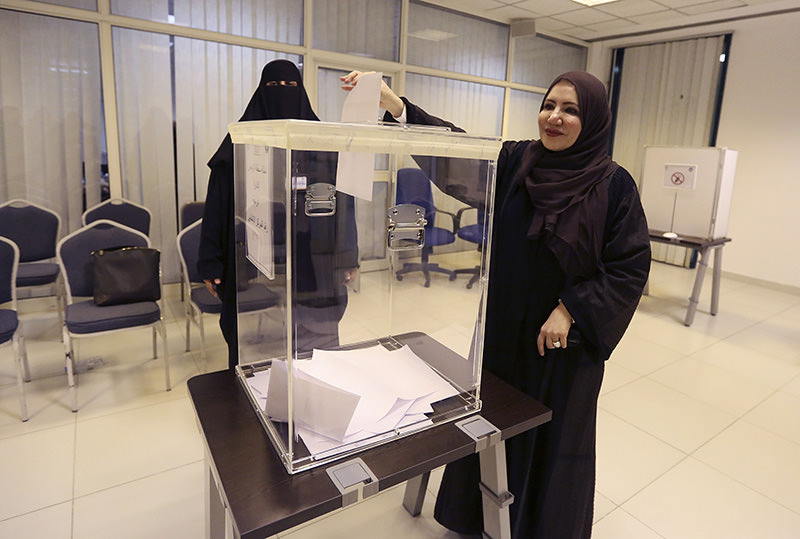 by Daily Sabah with AP Dec 12, 2015 12:00 am
Saudi women are heading to polling stations across the kingdom on Saturday, both as voters and candidates for the first time in this landmark election. More than 5,000 men and around 980 women are running as candidates for local municipal council seats. More than 130,000 women have registered to vote compared to 1.35 million men.

Saudis were some 122 years on delay compared to New Zealand, which had introduced universal suffrage for women in 1893. The first European country to introduce women's suffrage was [the Grand Duchy of] Finland in 1906 with 19 women being elected representatives to a parliament for the first time in the world. Turkish women won the right to vote in 1930 local elections, with Turkey being the first Muslim country in which women were allowed to vote.

The election, which does not have quotas for females, is widely seen as a small but significant opening for women to play a more equal role in Saudi society.

Not many women are expected to win seats because of the sheer number of male candidates and because many had no previous experience running campaigns. Many women said they also could not afford the high cost of running a public campaign.

"I don't consider winning to be the ultimate goal ... but it is the right of being a citizen that I concentrate on and I consider this a turning point," said Hatoon Al-Fassi, general coordinator for the grassroots Saudi Baladi Initiative that worked closely with women to raise voter awareness and increase female participation in the election. "We are looking at it as an opportunity to exercise our right and to push for more," she added.

These female candidates will also contend with a deep societal belief among many Saudi voters that women do not belong in public life. Abdullah Al-Maiteb made his way into a polling station in the capital Riyadh Saturday morning, expressing a widely held sentiment about why women shouldn't be on the ballot. "Her role is not in such places. Her role is at home managing the house and raising a new generation," he said. "If we allow her out of the house to do such business, who is going to take care of my sons?"

Municipal councils are the only government body in which Saudi citizens can elect their representatives. It's the third time in recent decades that Saudi men have been allowed to vote. The first local council election was held in 2005 and the second in 2011, with only men taking part.

In line with Saudi Arabia's strict gender segregation rules, men and women are casting ballots at separate polling stations. Female candidates could also not directly address male voters, and had to either present their platforms from behind a partition, relying on projectors and microphones, or through male supporters and relatives presenting for them.

Both male and female candidates relied heavily on social media to reach voters, using Twitter, Facebook and YouTube to announce campaign events and explain their platforms, which include ideas such as creating more youth centers, nurseries, parks and improving roads.

The candidates are vying for around 2,100 council seats with an additional 1,050 seats appointed with approval from the king.

While the municipal councils do not have legislative powers, they do oversee a range of community issues, such as budgets for maintaining and improving public facilities. All major decision-making powers rest solely in the hands of King Salman and the all-male Cabinet of ministers.

Karen Young, a senior resident scholar at the Arab Gulf States Institute in Washington DC, says the success rate of women in the Saudi municipal elections "will be slim to zero."

"There is not a clear understanding of what the value of representation can be within the current political system, though there are many activists who are committed to continuing this opening and trying to expand it inch by inch," she said.
Last Update: Dec 12, 2015 3:30 pm
RELATED TOPICS