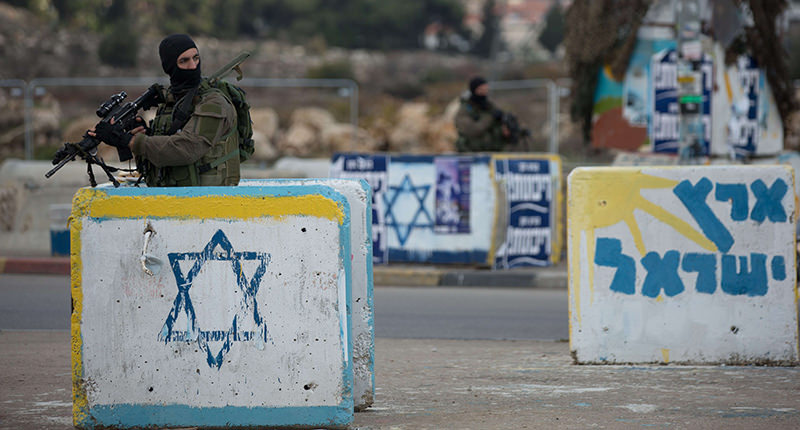 An Israeli soldier from the elite infantry unit stands guard at the Gush Etzion junction in the Israeli occupied on the main road between Jerusalem and Hebron on December 2, 2015 (AFP Photo)
by Dec 14, 2015 12:00 am
An Israeli-Arab soldier who served in the Israeli army has joined Daesh in Syria, the first soldier to do so, the Shin Bet domestic security agency said Sunday.

"It is the first time that a soldier in the Israeli army has joined Daesh," the agency said in a statement.

It said that the man is a Muslim and had slipped into Syria via Turkey a year ago to join Daesh.

Shin Bet did not identify the man, but said he was from an Arab village in the northern Galilee region.

According to the agency, around 35 Israeli Arabs have joined Daesh.

And a number of Israeli Arabs have died fighting with terrorist groups in Syria, which has been wracked by war for nearly five years, judicial sources say.

Last month Israel arrested six others on suspicion of planning to travel to Syria to join Daesh, after another Arab man crossed from the Israeli-occupied Golan Heights into neighboring Syria on a hang glider.

Israeli Arabs are Palestinians and their descendants who remained after the creation of Israel in 1948 and account for more than 17 percent of the country's population.

Military service is compulsory in Israel, including for Arab Druze who belong to an offshoot of Shiite Islam. But other Arab Muslims and Christians can enlist voluntarily.