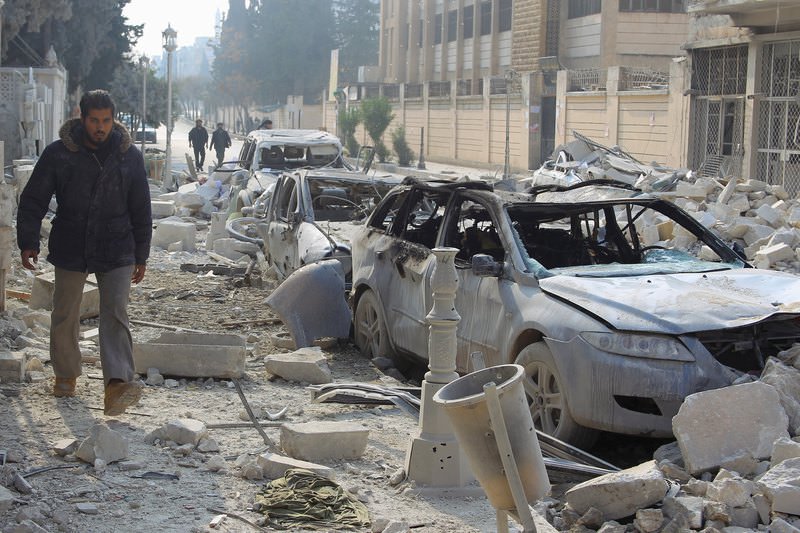 by Dec 20, 2015 12:00 am
Air strikes on Sunday likely to have been carried out by Russian warplanes in Syria's northwestern Idlib province killed 36 people, the Syrian Observatory for Human Rights said.

The Army of Conquest is a coalition that includes Al-Nusra Front and groups such as its ally Ahrar al-Sham.

"Dozens of people, mostly civilians, were wounded" in the raids, Abdel Rahman added.

Russia began a wave of air strikes on September 30 targeting the Daesh group and what Moscow calls "terrorist" organisations.

But the West and Syrian rebel movements accuse the Russians of focusing their raids more on groups battling Syrian President Bashar al-Assad's regime.

Elsewhere in Syria, pro-regime forces on Sunday seized a strategic rebel stronghold in the northern province of Aleppo, the Observatory and Syrian media reported.

State television also reported the news, saying: "Khan Tuman and the farms near it are the most important bastion of the terrorist organisations in southwest Aleppo province."

Khan Tuman was the scene of fierce clashes between loyalist forces, including fighters of Lebanon's Shiite militia Hezbollah, and rebels, said the Observatory.

Abdel Rahman said the battle for the key site saw "heavy bombardments and at least 40 raids by Syrian and Russian warplanes on the region".

The Britain-based monitoring group said 16 Islamists were killed but it did not have details of casualties on the government side.

Since mid-October, with air support from the Russians, Syrian forces have recaptured several areas in the north from Islamist forces including Al-Nusra Front.
Last Update: Dec 20, 2015 5:44 pm
RELATED TOPICS