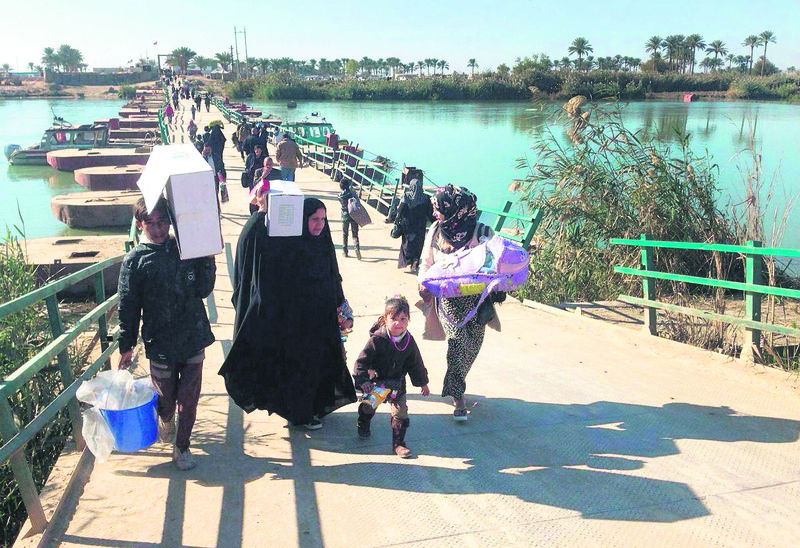 Since the Iraqi army preparing to launch a major operation to recapture Ramadi, Daesh has been preventing civilians from leaving the city while it changes its strategy to defend its territories rather than expanding

Daesh militants are preventing civilians from leaving Ramadi ahead of an attack planned by the Iraqi army to retake the western city that the militants captured in May, an Iraqi Defense Ministry spokesman said on Monday. "There are families that managed to escape the gangs of Daesh," the spokesman, Naseer Nuri, told Reuters, using a local derogatory name for the group. "There is intelligence information from inside the city that they are preventing families from leaving; they plan to use them as human shields," he added, without indicating the number of those who had managed to flee. Iraqi military planes on Sunday dropped leaflets on Ramadi, asking residents to leave within 72 hours and indicating safe routes for their exit. "It is an indication that a major military operation to retake the city center will start soon," one officer said on condition of anonymity. Last week Iraqi security forces said they had made advances on two fronts in Ramadi, clearing Daesh militants from a military command base and the sprawling neighborhood of al-Taamim on the western rim of the city that they captured in May. Iraqi intelligence estimates the number of Daesh fighters that are entrenched in the center of Ramadi, capital of Anbar province, at between 250 and 300.

Iraqi forces, along with Kurdish Peshmerga and the U.S. air forces have made significant advances against Daesh although the group still controls large swathes of Iraq. Iraqi security forces backed by coalition warplanes repelled two major Daesh offensives this week in combat that showed Iraqi troops increasingly are becoming "solid fighting forces," a U.S. military official said on Friday. In the most significant Daesh military operation in Iraq in seven months, a battalion-sized unit of some 500 Daesh militants attacked the Kurdish forward line in northern Iraq, penetrating it in three locations before being stopped and repelled, U.S. Army Colonel Steve Warren told a briefing.

As the military assaults on Daesh increasingly continue, the group has stopped making new gains. Stretched thin and under pressure by increasing air strikes, the Daesh has been forced into a defensive position in areas under its control in Syria and Iraq. Last year, the extremist group declared a self-styled caliphate across the borders of Syria and Iraq, sweeping quickly into Mosul and Raqqa. It also expanded beyond the Middle East, launching a series of spectacular attacks abroad that left dozens dead. But some experts believe the militant group's luck has changed. "In recent months, Daesh's positions along most of its fighting fronts in Syria and Iraq have turned defensive," says Iraqi expert Hisham al-Hashimi. "It has lost the initiative that it depended on to attack its enemies," he adds. Hashimi attributes the transformation partly to military pressure by the air wars against the group, which has been unable to move its forces in large columns the way it did last year.

The U.S.-led coalition has destroyed Daesh military posts, vehicles, and oil infrastructure. Furthermore, Daesh's "logistical stores have been drained," Hashimi says, and many of its key cross-border supply routes have been cut in recent months.

The extremist group has also depleted another key resource: suicide bombers, which proved crucial to Daesh's lightning attacks on cities in Iraq and Syria, but are in increasingly rare supply.

Despite a slow start, anti-Daesh efforts have reaped significant benefits in recent months. In Iraq, Daesh lost control of the town of Baiji and the nearby oil refinery, as well as the flashpoint town of Sinjar, cutting off its vital supply routes between Iraq and Syria. And in Syria, Daesh has been pushed back from swathes of territory in the northeast Hasakeh province by a Kurdish-Arab alliance, as well as other parts of Syria by regime fighters. "Daesh is being attacked on numerous fronts by various actors," said Syria analyst and geographical expert Fabrice Balanche. But Daesh has not lost all momentum, other analysts point out. "While it is true that they are currently consolidating rather than going on the offensive, they are still attracting legions of foreign recruits, they have demonstrated that they were able to strike everywhere," says Karim Bitar, from the Institute for International and Strategic Affairs. The number of foreign fighters in Iraq and Syria has more than doubled since last year to at least 27,000 people, says a recent study by the U.S.-based Soufan Group. Among those, between 20 and 30 percent were returning to their home countries, a dangerous development as Daesh in particular eyes more spectacular attacks overseas. Daesh will seek to "preoccupy the international coalition with its own internal security" and create "racist and religious chaos" between Muslims and the rest of the West, Hashimi says. "Without being able to shoot down coalition planes, Daesh will organize attacks in the heart of the coalition countries, like France, to try to destabilize us and win the propaganda battle, which is likely to bring it more funding and fighters," Balanche adds.
RELATED TOPICS