US preparing sanctions on Iran over ballistic missile program 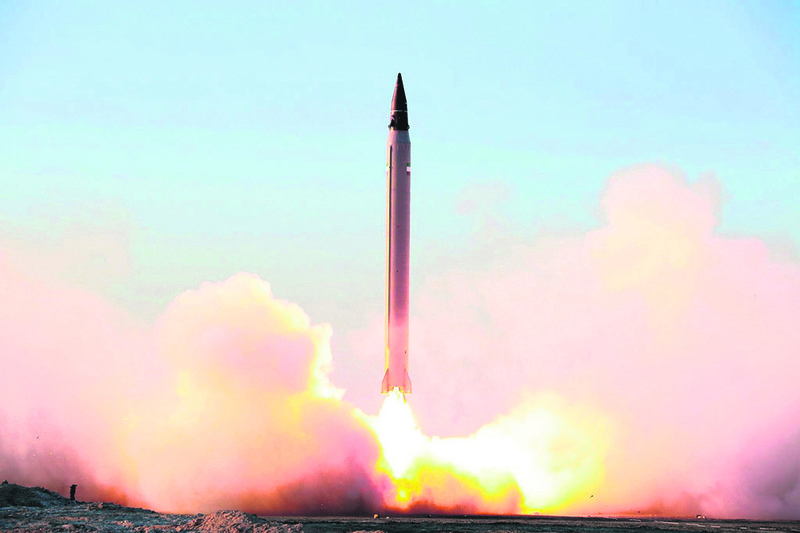 The U.S. seeks to impose new sanctions on Iran after it tested a missile capable of delivering a nuclear warhead in October and fired missiles near U.S. vessels, exposing tensions between Tehran and Washington

U.S. President Barack Obama's administration is preparing new sanctions on international companies and individuals over Iran's ballistic missile program, sources familiar with the situation said on Wednesday. The Wall Street Journal reported earlier that the potential sanctions would target about 12 companies and individuals in Iran, Hong Kong and the United Arab Emirates (UAE) for their suspected role in developing Iran's ballistic-missile program. U.S. officials have said the Treasury Department retains a right under July's landmark nuclear agreement between Iran and six world powers, including Washington, to blacklist Iranian entities suspected of involvement in missile development, the Journal said.

Iranian officials have said the country's supreme leader would view such penalties as violating the nuclear accord. "We've been looking for some time at options for additional actions related to Iran's ballistic missile program based on our continued concerns about its activities, including the October 10th launch," an Obama administration official said. "We are considering various aspects related to additional designations, as well as evolving diplomatic work that is consistent with our national security interests," the official said, on condition of anonymity. A team of U.N. sanctions monitors said in a confidential report seen by Reuters on Dec. 15 that a medium-range Emad rocket that Iran tested on Oct. 10 was a ballistic missile capable of delivering a nuclear warhead, making it a violation of a U.N. Security Council resolution.

Diplomats have said it was possible for the sanctions committee to blacklist additional Iranian individuals or entities over the missile launch. But they said Russia and China, which have opposed the sanctions on Iran's missile program, might block any such actions. Tehran has disputed the Western assessment that the Emad missile was capable of delivering a nuclear warhead.

The Journal said the planned Treasury Department sanctions concerned two Iran-linked networks involved in developing the country's missile program and include many of the people involved. The sanctions would prohibit U.S. or foreign nationals from conducting business with the companies. U.S. banks would also be required to freeze any assets the companies or individuals hold inside the American financial system. Among those targeted would be UAE-based Mabrooka Trading Co LLC and its founder, Hossein Pournaghshband, for aiding Iranian state companies in acquiring carbon fiber for Iran's missile program, the newspaper said, citing a Treasury statement. The Treasury is also preparing to sanction five Iranian officials at the country's defense ministry and its subsidiaries for work on the ballistic-missile program, according to the newspaper. The Journal said reasons for the potential sanctions included ties the Treasury is alleging between Iran and North Korea on missile development.

Despite a landmark nuclear deal, the tensions are escalated between the countries as the U.S. on Wednesday accused Iran of launching a "highly provocative" rocket test last week near its warships and commercial traffic passing through the Strait of Hormuz. The strategic Persian Gulf waterway, which sees nearly a third of all oil traded by sea pass through it, has been the scene of past confrontations between America and Iran, including a one-day naval battle in 1988.

Military vessels taking part in the war against the Daesh terrorist group in Iraq and Syria also pass through the narrow waterway between Iran and Oman. On Saturday, the USS Harry S. Truman aircraft carrier, the USS Bulkeley destroyer and a French frigate, the FS Provence, were passing through it, said Cmdr. Kyle Raines, a U.S. Central Command spokesman. As they passed, Iranian Revolutionary Guard vessels, hailing other ships in the strait over maritime radio, announced they'd be carrying out a live fire exercise, Raines said in a statement. After 23 minutes, the Iranian boats fired "several unguided rockets" about 1,370 meters (1,500 yards) from the warships and commercial traffic, he said. While the rockets weren't fired in the direction of any ships, Raines said Iran's "actions were highly provocative." "Firing weapons so close to passing coalition ships and commercial traffic within an internationally recognized maritime traffic lane is unsafe, unprofessional and inconsistent with international maritime law," he said.

However, Iran on Thursday denied the claims, rejecting the U.S. report as 'psychological warfare'. "The naval forces of the Guards have not had any exercises in the Strait of Hormuz during the past week and the period claimed by the Americans, for them to have launched missiles and rockets," the Revolutionary Guards website quoted Ramezan Sharif, the Guard's spokesman, as saying. "The publication of such false news under the present circumstances is akin to psychological warfare," Sharif said.
RELATED TOPICS