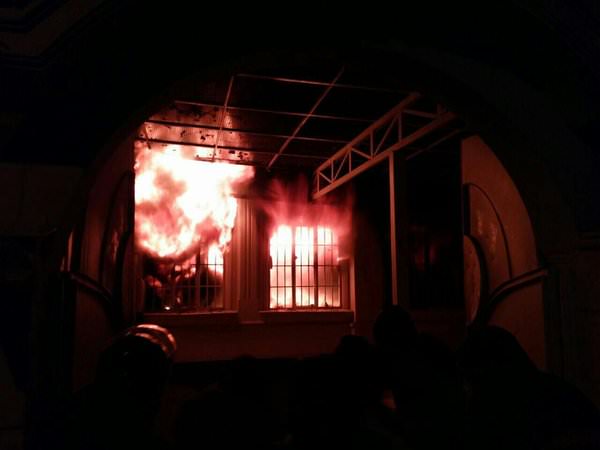 The execution of a prominent Shiite figure following accusations of aiming to overthrow the Saudi kingdom is likely to ramp up the sectarian dispute between Riyadh and Tehran as Iran considers itself the leader of all Shiites across the Muslim world and has directly intervened in conflicts in Syria, Iraq, Yemen and Bahrain

The execution of Sheikh Nimr al-Nimr on Saturday along with 46 others, including three other Shiite dissidents and dozens of al-Qaida members, has revealed the perilous tensions between Riyadh and Tehran – who are considered to be locked in a proxy war. Iran's harsh response to the execution, not only through official statements but also with acts that include the torching of the Saudi embassy in Tehran, along with the accusation that Saudi Arabia is suppressing the Shiite minority, revealed again that Iran has been following a sect-based expansionist policy toward the region with Tehran intervening directly in the conflicts in Iraq, Syria, Yemen and Bahrain with the claim that it is the guardian of Shiites across the Islamic world. However, its alliance with Russia and China, from which the Islamic world is suffering from Syria to Xinjiang, casts doubt on Iran's intentions.

Al-Nimr, who was born in Saudi Arabia as a member of the Shiite minority, was educated in Iran and was critical of the Kingdom, and was charged with spreading terrorism and aiming to destroy Saudi Arabia. "Nimr, with his wiry and graybeard, had been the most vocal critic of the Kingdom's ruling al-Saud clan for years before mass protests erupted among the Saudi Shiites during the 2011 Arab uprisings, and had called for demonstrations. In the eyes of the Saudi police and the court that convicted him late in 2014, the 56-year-old was an instigator of shooting and bombing attacks against the authorities on behalf of Riyadh's main regional rival, Shiite Iran," Reuters said.

Saudi Arabia - which has cracked down on several Sunni groups as well, including the Muslim Brotherhood - has a habit of destroying its dissidents regardless of the sect. "Nimr's supporters, including many younger Saudi Shiites have always maintained that the preacher was careful to avoid calling for violence, and highlighted his vocal criticism of the oppression of Sunni Muslims in Syria," Reuters said, but the point that Al-Nimr criticized Syria's Bashar Assad before Iran has explicitly showed its position in Syria.

Al-Nimr was an ardent dissident of the Kingdom and he rejoiced the death of former Saudi Interior Minister Prince Nayef bin Abdulaziz in 2012. "He will be eaten by worms and suffer the torments of hell in the grave. The man who made us live in fear and terror; shouldn't we rejoice at his death?" he said. Prince Nayef's son, Mohammed bin Nayef is the current interior minister and authorized the death sentences. Al-Nimr's words show how deep the tensions were between the Kingdom and the preacher.

Al-Nimr's execution sparked outrage across the region among the Shiites. While hundreds of them have staged mass protests in Saudi Arabia and Bahrain, hundreds of Iranians have set the Saudi embassy in Tehran on fire. Although Iranian police arrested 40 demonstrators to calm the situation, the statements made by top Iranian officials were far from diplomatic, accusing Saudi Arabia of escalating tensions and even likening Riyadh to Daesh.

"Iran's Supreme Leader Ayatollah Ali Khamenei condemned the execution Sunday in a statement on his website, saying al-Nimr "neither invited people to take up arms nor hatched covert plots.'" On Saturday, an image was posted on the website of the supreme leader in Iran, Ayatollah Ali Khamenei, depicting what appeared to be an Islamic State fighter about to kill a hostage and a Saudi executioner with a sword, with the question "Any differences?" According to the New York Times, Iran's powerful Revolutionary Guard said, "The only thing he did was make public criticism."

Saudi Arabia's "medieval act of savagery" in executing the cleric would lead to the "downfall" of the country's monarchy, the AP reported. "The Iranian Foreign Ministry has summoned the Saudi envoy in Tehran to protest, while the Saudi Foreign Ministry later said it had summoned Iran's envoy to the Kingdom to protest Iran's criticism of the execution, saying it represented "blatant interference" in its internal affairs," the agency said. Iranian President Hassan Rouhani, along with Iraqi Prime Minister Haider al-Abadi, condemned the execution.

The Saudi Foreign Ministry responded to Iranian statements harshly, accusing Tehran of supporting terrorism. Al-Arabiya quoted a Saudi Foreign Ministry official as saying that Iran was "The last country in the world that could accuse others of supporting terrorism." The state-run Saudi Press Agency also quoted the official as saying that "The Iranian regime is the last regime in the world that could accuse others of supporting terrorism, considering that [Iran] is a state that sponsors terror, and is condemned by the United Nations and many countries." The official also touched on Iran's intervention in Iraq, Syria and Yemen and said that Iran "blatantly" intervened in those countries.
The international community, including the U.S., the U.K. and Germany, expressed their concern over the execution and said the move will deepen the sectarian conflict in the region. John Kirby, a State Department spokesman, said the U.S. was concerned and that "the execution risks exacerbating sectarian tensions at a time when they urgently need to be reduced."

The Middle East, which has been an area of sectarian conflict since the early years of Islam, ‎yet remained relatively calm under the rule of the Ottoman Empire, has been dragged into a new sectarian wave as anachronistic disputes have been triggered by regional powers with the intention of expanding their influence. Iran and Saudi Arabia, which has a centralized Shia version of Islam and the strict religious jurisprudence of Salafi-Wahhabist thought for its policies, respectively, have entered into a competition over the region by applying sectarian policies from which the people of the region suffer. Being far from the mainstream Islamic understanding that is in effect from Indonesia to Senegal, the two countries have been following expansionist policies. Iran has adopted the policy of leading and uniting the Shiite communities in different Arab countries, including Iraq and Yemen, following the revolution in 1979, whereas Saudi Arabia aims to expand Wahhabi Islam, an offshoot Sunni sect, through aiding Wahhabi communities in several countries, as the strict version of Islam rejects the accuracy of any other Islamic interpretation.

The two countries, Iran and Saudi Arabia, respectively, have been holding the flag of sectarianism and using the centuries-old conflicts, narratives and Islamic interpretations as a cloak for their struggle for power. Tehran's involvement in the war in Syria and in the conflict in Iraq through alliance with Russia has diminished the stability and path to peace in the region. The so-called "Arab Spring" that started in Tunisia and euphorically swept across MENA has posed a threat to both countries since Iran, which was in support of the uprisings in the Gulf by Shiite minorities, especially in Bahrain and Saudi Arabia, felt obliged to stop the moderate Western-backed opposition groups in Syria from overthrowing the Alawite minority's, an offshoot Shiite sect, decades-long rule and Saudi Arabia had to preserve its kingdom from both the Shiite minority and Islamist movements like the Muslim Brotherhood. Iraq has also become a territory for the two countries as a power struggle area as Iran has been pursuing a sectarian policy through backing the Shiite Baghdad government which has a disastrous fame with its treatment against Sunnis, and backing the Shiite militias which had been harshly criticized by rights groups for arbitrary killings, rapes, kidnappings and looting. Moreover, the removal of Yemeni President Abd Rabbu Mansur Hadi by Iranian-backed Shiite Houthi militias has led to a Saudi-led coalition that has been pounding Yemen for months.

The tensions between the countries also appear in different regions across the world like the Balkans and Africa where the preachers of two sects have been struggling to collect more supporters. Obviously, the tensions and disputes are not new as in 1980 when thousands of Iranians occupied Kaaba and demanded the Kingdom's family to abdicate the throne, resulting in the executions of 63 Iranians by Saudi Arabia.
Last Update: Jan 04, 2016 1:31 am