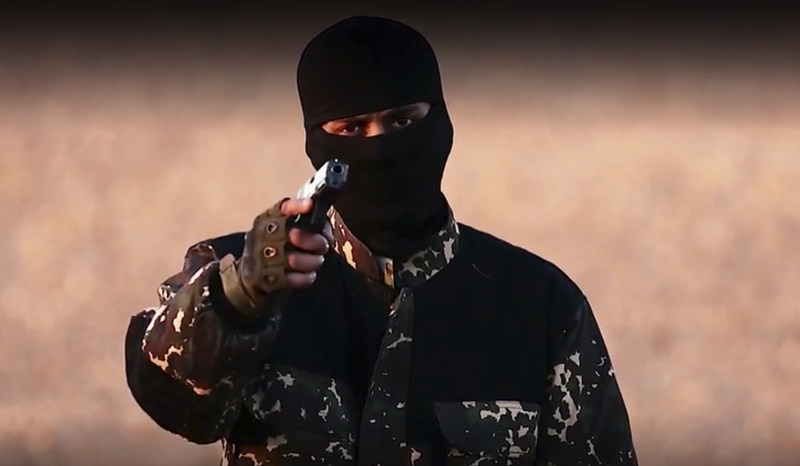 by Daily Sabah with AFP Jan 03, 2016 12:00 am
The Daesh terrorist organization threatened the United Kingdom in an Internet video emerged on Sunday showing the killing of five "spies" it said worked with the international coalition fighting Daesh in Iraq and Syria.

The SITE Intelligence Group said the video shows five men from Raqqa, the main stronghold of the militant group, confessing to carrying out acts of espionage.

The British foreign office issued a terse statement saying only: "We are aware of the video and are examining the content."

In the footage, an English-speaking Daesh terrorist mocks British Prime Minister David Cameron for challenging Daesh, and calls him an "imbecile".

The "confessions" of the five do not clearly identify which countries they worked with, but one mentions the international coalition led by the United States battling against Daesh in Iraq and Syria.

The video said they passed videos or photos of the living conditions in Raqqa to people in Turkey, or monitored the movements of Daesh fighters.

The five are seen wearing orange jumpsuits and kneeling before five masked fighters, all in military fatigues and armed with pistols.

"This is a message to David Cameron," says one of the gunmen, speaking in a British accent.

British warplanes, which were already attacking Daesh positions in Iraq, at the beginning of December began targeting the militants in Syria also.

The fighter says those who want to continue fighting "under the banner of Cameron" should ask themselves what would happen to them if they were to fall into Daesh's hands.

He also says Daesh will wage war against Britain, before the five men are killed with a bullet to the head.

In Iraq last Sunday, federal forces declared victory in the battle for Ramadi, which Daesh seized in May 2015.