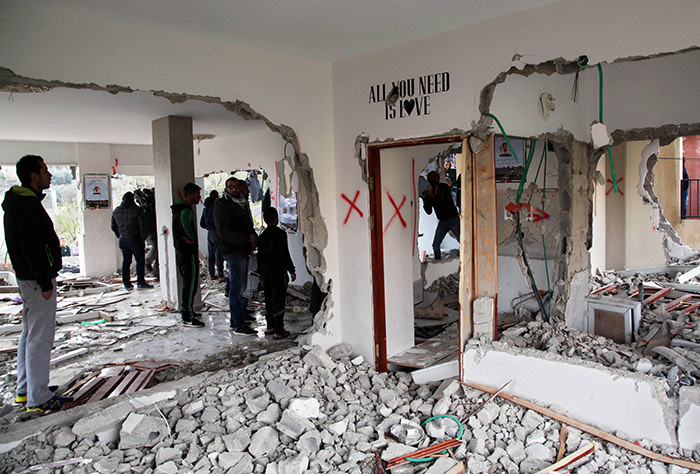 Palestinians stand inside a house that was demolished by the Israeli military in the east Jerusalem neighborhood of Jabal Mukaber, Monday, Jan. 4, 2016 (AP Photo)
by Daily Sabah with Agencies Jan 04, 2016 12:00 am
Israeli forces demolished and sealed off the Jerusalem homes of two Palestinians involved in attacks against Israelis in the city last year.

In the neighborhood of Jabel Mukaber, the home of Palestinian Alaa Abu Jamal was filled with concrete and sealed off, an AFP reporter at the scene said.

Abu Jamal had on October 13 rammed his car into people at a Jerusalem bus stop and jumped out with a knife, stabbing a rabbi to death before being shot dead.

Abu Jamal was also a cousin of two Palestinians who in November stormed a synagogue in Jerusalem's Har Nof neighborhood with meat cleavers and a pistol, killing five Jewish worshippers and a policeman before being shot dead.

In another part of Jabel Mukaber, Israeli forces used jackhammers to destroy the walls of Bahaa Allyan's home, the middle floor of a three-story building.

Allyan and another Palestinian, Bilal Ghanem, had on October 13 shot and stabbed passengers on a bus in Jerusalem, killing two Israelis and a US-Israeli dual national.

Allyan was shot dead while Ghanem was arrested.

Hundreds of Israeli police and soldiers were on site for the home destructions, which took place without incident after residents were cleared from the area.

"I don't have any other place to live," Allyan's father Mohammed told AFP.

"The army just said 'we are going to destroy the house, get out' -- this measure punishes a father, a mother, a brother, a sister and (four) children" who were living in the house, he said.

Israel claims home demolitions such as Monday's operation are an effective tool to deter attacks. Critics say the tactic amounts to collective punishment.