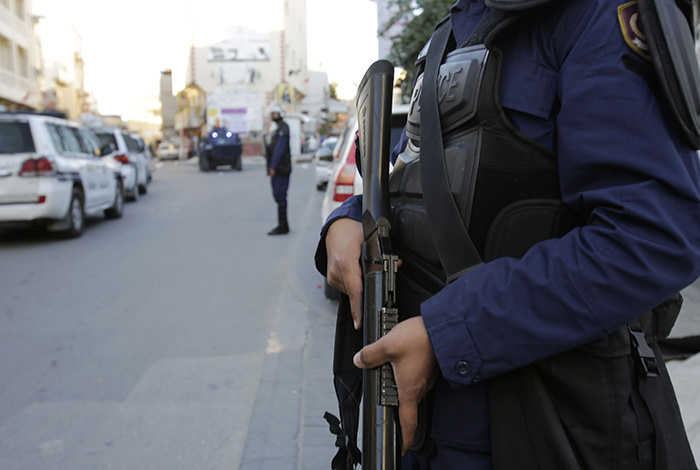 Bahrain's riot police (AP Photo)
by reuters Jan 06, 2016 12:00 am
Bahrain said on Wednesday it had caught an Iranian-linked cell plotting attacks on its territory, days after it followed its close ally Saudi Arabia in cutting ties with Iran.

There was no immediate reaction from Iran, caught up in a mounting diplomatic dispute with its regional rival Saudi Arabia and other Sunni-led Gulf states including Bahrain.

"It targeted the security of the kingdom of Bahrain by (plotting to) carry out a series of dangerous bombings," it added.

Iran has regularly denied accusations in the past of involvement in attacks in Bahrain, which has been in political turmoil since protests erupted there in 2011, led by majority Shi'ite Muslims demanding an end to the Sunni monarchy's political domination and full powers for parliament.

Tensions mounted further after Saudi Arabia executed 47 people on Saturday, including four Shi'ite Muslims, among them prominent cleric Nimr al-Nimr, a move that triggered protests and the storming of the Saudi embassy in Shi'ite Muslim power Iran.

Saudi Arabia and Bahrain, the base for the U.S. Navy's Fifth Fleet, cut ties response with Iran in response.

BNA said a main suspect, Ali Ahmed Fakhrawi, had travelled to Lebanon and personally met the head of the Shi'ite militant group Hezbollah, who gave him $20,000 to aid the cell.

Fakhrawi and his twin brother were linked to the militant activities of eight other suspects named by BNA, some of whom were arrested as early as 2013 and two of whom were designated as fugitives, one in Iran.

In November, Bahrain said it had arrested 47 members of a group believed to have links to "terrorist elements in Iran" who it said were planning to carry out attacks in the coming days.

Bahrain recalled its ambassador to Iran in October after it said security forces discovered a bomb-making factory and arrested a number of suspects linked to the Revolutionary Guard.

In March, Bahrain's public prosecutor said it seized bomb-making equipment being smuggled from Iraq aboard a passenger bus for use in attacks.
Last Update: Jan 06, 2016 5:45 pm
RELATED TOPICS