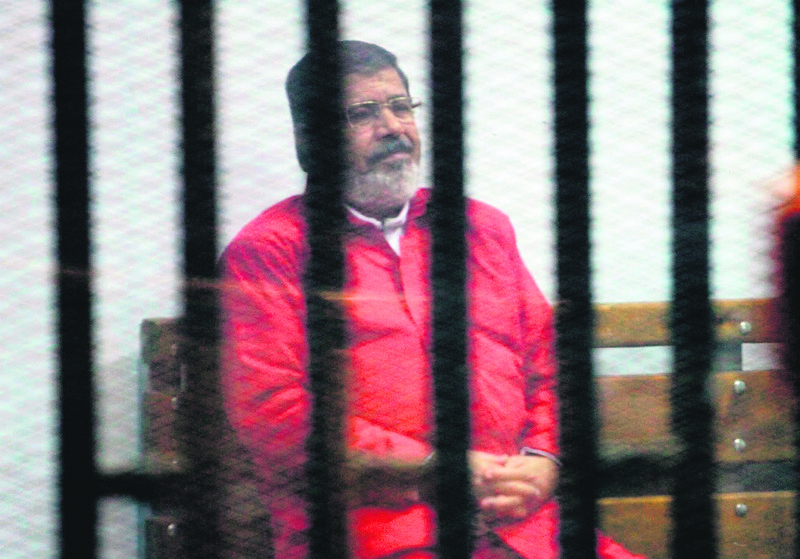 A senior Muslim Brotherhood figure said an Egyptian appellate court canceled Morsi's death sentence and paved the way for a retrial over a prison escape in 2011. The rapprochement between Ankara and Riyadh is likely to have a role in the decision

An Egyptian appellate court canceled the death sentence of Egypt's first democratically elected president, Mohammad Morsi who was overthrown after a military coup, led by the incumbent President Abdel-Fattah el-Sissi in 2013, a senior Muslim Brotherhood figure told Daily Sabah Tuesday. The official, who spoke on the condition of anonymity due to security reasons, said they believe the death sentences will be abolished if the court holds fair trials. Another Egyptian court accepted the appeal and ordered the retrial of several prominent Muslim Brotherhood figures, including the supreme leader Mohammad el-Badie on Monday. Morsi, along with another 105 defendants, was given a life sentence for spying for foreign powers and was given a death sentence over a mass prison break during the incidents in 2011 that ousted former autocratic President Hosni Mubarak who ruled Egypt for 30 years.

Over the jail break, the court claimed that Morsi and other Muslim Brotherhood members unlawfully left the prison. But in a telephone interview conducted with Morsi by Al Jazeera in 2011, the ousted president said that he and other Muslim Brotherhood members had not left the prison despite the fact that many were fleeing. In the interview, Morsi claimed that he and others waited for permission from the officials. The fairness of the trial of Morsi and other Muslim Brotherhood members was suspicious, as many defendants said they were not allowed by the court to defend themselves. Even the lawyers were banned from reaching their clients. In an interview with Daily Sabah, Morsi's lawyer Rodney Dixon last June said: "It wasn't a fair trial, it wasn't independent. There has been interference from the political authorities. We've got evidence of that, proof of that. The trial has not guaranteed his rights to fair legal representation and to present a defense," and voiced his concern that the decision would not be in line with justice.

The decisions came less than a week after Turkish President Recep Tayyip Erdoğan visited Saudi Arabia, which was one of the eager supporters of the coup. The damaged relations between Ankara and Riyadh over Morsi's ouster during King Abdallah's reign, was restored after King Salman took the throne. Amid the chaotic atmosphere in the region, Turkey and Saudi Arabia are positioning themselves closer to each other as the two countries enjoy similar interests in Iraq, Syria and Yemen. The crisis between Russia and Turkey over the downed Russian jet by Turkey and the deepening rift between Saudi Arabia and Iran after the execution of prominent Shiite figure Nimr al-Nimr by Saudi Arabia on Saturday have indicated that conflicts in Syria, Iraq and Yemen are forcing regional powers to both collaborate and go head-to-head with each other. Saudi Arabia, which considers Iran its biggest enemy, wants to sustain its alliance with Turkey and is likely to respond to Turkey's demands. Since the coup, Turkey has been asking Saudi Arabia to put pressure on Egypt to release the arrested politicians, activists and journalists. Although there is no official comment on the issue, it is known that Turkey has not changed its approach to the death sentences and that King Salman aims to ease the tensions among its allies.

Another fact that may change the fate of the Muslim Brotherhood members is that the Egyptian government is in favor of mending relations with Turkey as Cairo fears being isolated and deprived of the Turkish-Saudi alliance amid the escalated tensions in the region. Bilateral relations between Turkey and Egypt will go back to normal, Egyptian Foreign Minister Sameh Shoukry said in a televised interview last month. "We hope for the return of Egyptian relations, Turkey will restore relations with Egypt, relations that were based on mutual respect and noninterference in internal affairs and sovereignty of the state," Shoukry said. "I imagine that Turkey always strives to have a positive relationship … and to take into account its relationship with Egypt and return to a positive framework. We are always open to having positive relationships and building the interests of both peoples," he added.

Turkey, which is working to mend the relations with Israel, wants to increase its cooperation with stable countries in the region. Israel, which has suffered at the hands of the Iranian-backed Shiite militant group Hezbollah that fights against Western and Turkish-backed rebels in Syria, also has a positive look on the struggles. The common interest on Israeli gas also appears as another reason for Ankara and Tel Aviv to restore damaged relations. Egypt, which re-appointed its ambassador to Israel this week, may not want to remain lonely in the region while key powers are increasing alliances.

It is a fact that the trials of Morsi and other political figures were completely made on the basis of political interests and open to foreign influence. Egypt, which is considered the heart of the Arab world, could aim to be positioned in line with Turkey, Saudi Arabia and Israel against Russia and Iran. However, just as Turkey has laid down the abolition of the embargo on Gaza as a condition to Israel, it will insist on the release of the political prisoners, the number of whom has already exceeded 1,000 and who are subjected to unacceptable conditions in terms of human rights according to several rights groups' reports.
Last Update: Jan 06, 2016 11:41 am
RELATED TOPICS