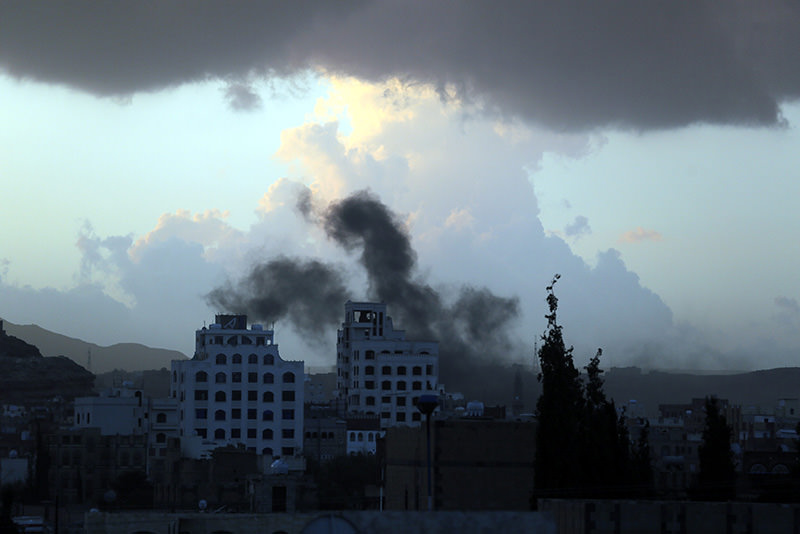 by reuters Jan 07, 2016 12:00 am
Dozens of air strikes hit the Yemeni capital Sanaa on Thursday, in what residents described as the heaviest aerial attacks there in nine months of war, days after a Saudi-led coalition trying to restore a Saudi-backed government ended a fragile ceasefire.

The strikes pounded the presidential palace and a mountain military base to the south of the city, causing children and teachers in several schools to flee for their lives.

"My classmate and I were at recess when a huge explosion hit the neighborhood. We ran to the side and she fell to the ground in fear," said Maha, a tenth grader in a Sanaa school. "Everybody was screaming and the administration got us together and called our parents to take us out - all the students were in a panic." There were no immediate reports of casualties.

A coalition led by Saudi Arabia and its Sunni Muslim allies has been fighting the Shiite Houthi movement, which controls the capital.

While Riyadh sees the Houthis as a proxy for Iran, Saudi Arabia's bitter regional rival, to expand its influence, the Houthis deny this and say they are fighting a revolution against a corrupt government and Gulf Arab powers beholden to the West.

Almost 6,000 people have died in the conflict, nearly half of them civilians. United Nations-backed peace talks have yet to produce any substantial progress.

A new front opened in the nine-month-old civil war when forces loyal to the embattled Saudi-backed president, Abed Rabbo Mansour Hadi, landed by sea at the Red Sea port of Maydee near the border with Saudi Arabia late on Wednesday, according to residents. Northern Yemen is a Houthi stronghold.

Hadi's forces attempted to push out from Maydee's port, pounded for weeks by air strikes and naval shelling, into the surrounding city, but ran into heavy Houthi resistance and landmines, residents told Reuters by telephone.

Major General Adel Qumairi of the pro-government forces told Saudi-owned Arabiya TV that his forces had "completely taken control" of the city.

But Yemen's state news agency Saba, run by the Houthis, quoted Sharaf Luqman, a spokesman for forces allied to the group, as saying the advance had been met by "heroic resistance" that caused them "great material and human losses".

Saudi Arabia on Saturday announced the end of a truce that had reduced fighting but had been repeatedly violated by both sides.
The Saudi spokesman for the coalition, Brigadier General Ahmed Asseri, told Al Arabiya that a Houthi ballistic missile aimed at the kingdom overnight had exploded on launch.
Last Update: Jan 07, 2016 12:21 pm
RELATED TOPICS