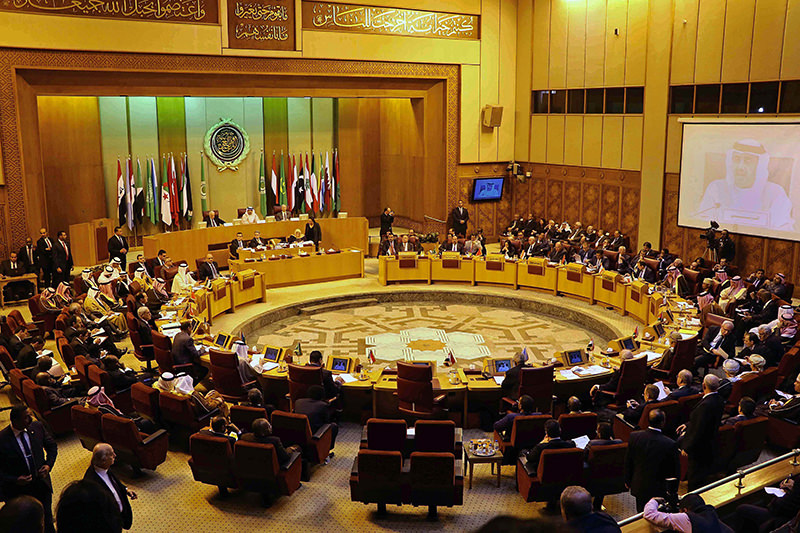 Arab foreign ministers attend an emergency Arab League session in Cairo, Egypt, Sunday, Jan. 10, 2016. (AP Photo)
by reuters Jan 10, 2016 12:00 am
Arab foreign ministers condemned attacks on Saudi diplomatic missions in Iran and warned on Sunday that the country would face wider opposition if it continued its "interference" in the internal affairs of Arab states.

Tensions between the Sunni Muslim kingdom of Saudi Arabia and Iran have escalated since Saudi authorities executed a Shi'ite cleric on terror charges on January 2.

In response, Iranian protesters stormed the Saudi embassy in Tehran and its consulate in Mashhad, prompting Riyadh to sever relations. Tehran then cut all commercial ties with Riyadh, and banned pilgrims from travelling to Mecca. Other Arab countries have downgraded ties or recalled envoys to Iran in solidarity with Saudi Arabia.

Saudi Foreign Minister Adel al-Jubeir said following an emergency Arab League meeting in Cairo that cutting commercial and diplomatic ties was a first step, and that his country would discuss potential further actions against Iran with its regional and international allies. He gave no further details.

If Iran continues to support "terrorism, sectarianism and violence", it would face opposition from all Arab countries, Jubeir told a news conference following the meeting.

Jubeir confirmed that some countries had offered to mediate in the dispute but suggested that such efforts were unlikely to make any progress.

"With regards to mediation, there are some states that have expressed their readiness to conduct this, but the important thing is seriousness with regards to the Iranian position," he said.

In a closing statement distributed after the meeting, the Arab League also referred to the reported discovery by Bahrain of a militant group that it said was backed by Iran's Revolutionary Guards.

All members of the Arab League voted in favour of the statement, with the exception of Lebanon, where Iranian-backed Hezbollah is a powerful political force.

The statement did not agree on any specific joint measures against Iran but set up a smaller committee comprising the Arab League secretary general and representatives from Egypt, the United Arab Emirates, Saudi Arabia and Bahrain to follow up on the row.