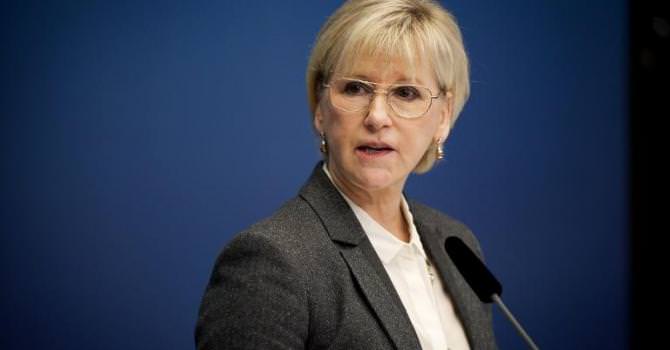 Swedish FM Margot Wallstru00f6m, at a press conference in Stockholm, Oct 30, 2014 after the recognition by Sweden of the State of Palestine. (AFP Photo)
by Daily Sabah with Reuters Jan 12, 2016 12:00 am
Swedish Foreign Minister Margot Wallstrom called on Tuesday for an investigation to determine whether Israel was guilty of extrajudicial killings of Palestinians during recent violence there, local media reported.

The comments were the latest in a series of statements by Wallstrom that have irked Israeli authorities. Ties between Sweden and Israel nose-dived when Sweden recognized the Palestinian state shortly after Wallstrom's center-left Social Democrats won a parliamentary election in 2014.

"It is vital that there is a thorough, credible investigation into these deaths in order to clarify and bring about possible accountability," Wallstrom said during a parliamentary debate, according to news agency TT.

Rights groups have accused Israel of using excessive force to quell the protests.

The United States, the European Union and the United Nations have all expressed concern, saying that restraint is necessary to ensure the violence does not escalate further.

Since Oct. 1, the wave of bloodshed has raised fears of wider confrontation, a decade after the last Palestinian resistance was forced to come to an end.

During the period, Israeli forces or armed civilians have killed at least 142 Palestinians, injuring dozens. Most have been killed in clashes with security forces.

The surge in violence has been fueled by the 2014 collapse of U.S.-sponsored peace talks and the growth of illegal Jewish settlements on the occupied Palestinian territories.