US stands with Saudis in dispute with Iran, Kerry says 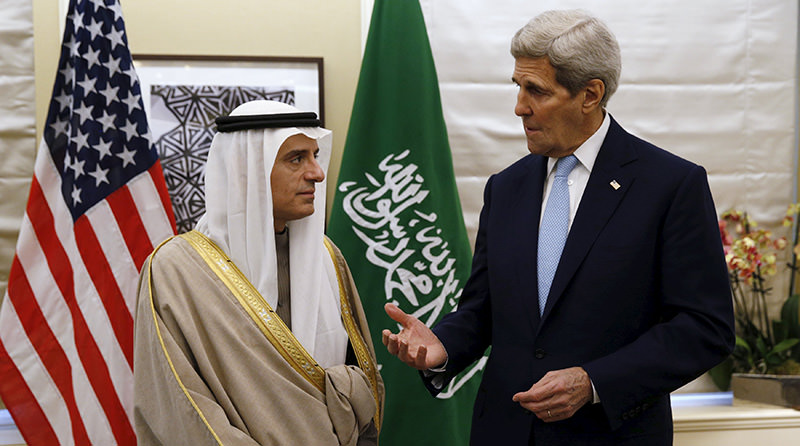 U.S. Secretary of State John Kerry speaks during his meeting with Saudi Arabia's Foreign Minister Adel al-Jubeir in London January 14, 2016 (Reuters Photo)
by Compiled from Wire Services Jan 14, 2016 12:00 am
U.S. Secretary of State John Kerry said he is standing by ally Saudi Arabia in its dispute with Iran, even as he seeks a diplomatic solution between the regional rivals.

Kerry's meeting with Saudi Foreign Minister Adel al-Jubeir (AD'-duhl ahl-joo-BEHR') came amid America's own difficulties with the kingdom, and as Shiite Iran looks forward to a huge payoff in sanctions relief for implementing the nuclear deal.

Saudi Arabia is wary of that scenario. Washington opposes the mass executions Saudi Arabia carried out Jan. 2, sparking the crisis with Iran, which led to Saudi Arabia and others cutting diplomatic ties.

Kerry said in London Thursday that countries in the region shouldn't interfere in others' affairs. But he said he wants diplomacy to work.

"These acts of terror are not going to intimidate nation-states from protecting their citizens and continuing to provide real opportunity, education, jobs, possibilities of a future," Kerry said at the meeting in London.

"There is nothing in any act of terror that offers anything but death and destruction. And so we stand together, all of us, united in our efforts to eliminate those who choose terror," he said.