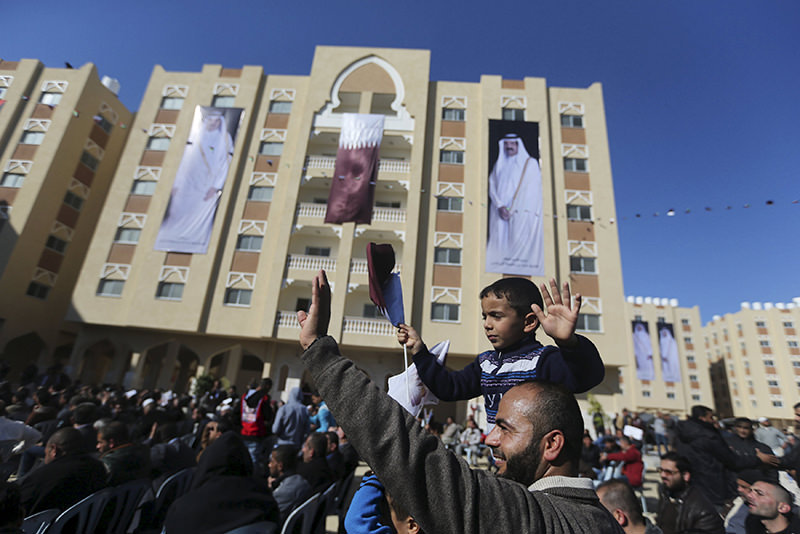 Posters depicting Qatar's former Emir Sheikh Hamad bin Khalifa al-Thani (R) and Emir of Qatar Tamim bin Hamad al-Thani (L) are seen on a building as a Palestinian man holding his son waves. (REUTERS Photo)
by reuters Jan 16, 2016 12:00 am
Qatari-funded construction projects have provided 1,000 new dwellings for Palestinians left homeless by the 2014 Gaza war with Israel, and a similar number for low-income families in the territory, officials said on Saturday.

The Gulf state's contribution is the sole significant sign of rebuilding in the Gaza Strip, where some 100,000 people remain displaced 18 months after the fighting, with economic growth stifled by Israeli and Egyptian blockades.

The Qatari donations have buoyed Gaza's de facto Islamist Hamas rulers, irking Israel and the U.S.-backed Palestinian administration based in the occupied West Bank. Past efforts by Qatar to mediate between Hamas and Israel yielded little.

After the 2014 war, Qatar pledged $1 billion for building projects in Gaza, of which $50 million was paid to owners of destroyed houses to fund the rebuilding of shelters. Qatar envoy Mohammed Al-Amadi said 1,000 new homes had been completed since.

"Qatar exerts every effort to help the people of Gaza in the fields of electricity, agriculture, infrastructure and housing, including the rebuilding of completely destroyed houses," Amadi told Reuters.

Israel bars the import of products it suspects Hamas might use to rearm or build fortifications, although it began easing restrictions in October under a mechanism overseen by the United Nations.

"Only 400,000 tonnes of cement have entered Gaza since October 2014, or the equivalent of Gaza's need of cement in two months only," said Tabbaa, who is also in charge of public relations at Gaza's Chamber of Commerce.

Officials said on Saturday that Qatari funding had provided another 1,060 new homes in the Gaza town of Khan Younis for low-income families.