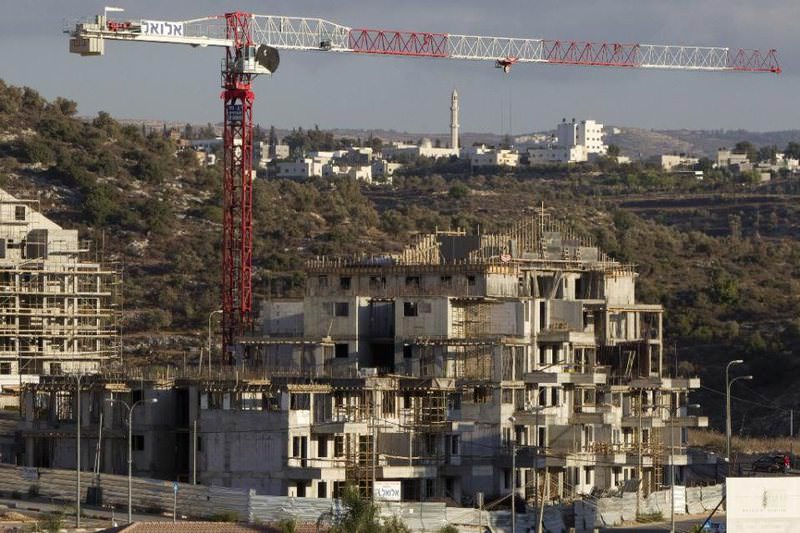 Construction of Israeli settlements (File Photo)
by French Press Agency - AFP Jan 19, 2016 12:00 am
Companies operating in Israeli settlements in the occupied West Bank contribute to "an inherently unlawful and abusive system" violating Palestinian rights and should halt activity there, Human Rights Watch (HRW) said Tuesday. The new report from the United States-based rights group describes Israeli policies in the West Bank that lead to government support of settlements, the "unlawful confiscation" of Palestinian land and denial of permits to Palestinians. According to the report, which cites examples of foreign firms linked to settlements, including cement and real estate companies, "Israel's privileged treatment of settlers extends to virtually every aspect of life in the West Bank."

"Settlement businesses unavoidably contribute to Israeli policies that dispossess and harshly discriminate against Palestinians, while profiting from Israel's theft of Palestinian land and other resources," HRW's Arvind Ganesan said in a statement. "The only way for businesses to comply with their own human rights responsibilities is to stop working with and in Israeli settlements."

The Israeli Foreign Ministry said officials were studying the report, but called it "one-sided." "At a time when Israel and the international community are taking practical steps to bolster the Palestinian economy and increase Palestinian employment, Israel is concerned with this one-sided, politicized report, which jeopardizes the livelihoods of thousands of Palestinians and discourages rare examples of coexistence, coordination and cooperation between Israelis and Palestinians," it said.

Israel occupied the West Bank in the 1967 Six Day War and more than 500,000 Israeli settlers now live in the territory and in East Jerusalem. The 1990s Oslo Accords divided the West Bank into zones known as Areas A, B and C. Area C, some 60 percent of the West Bank, is under full Israeli military and civilian control. The accords were intended to lead to a permanent resolution within five years. More than two decades later, however, peace efforts are at a standstill, and a fresh wave of Palestinian gun, knife and car-ramming attacks erupted in October.

Some analysts say frustration with Israel's continuing occupation as well as the Palestinians' fractured leadership have been key reasons for the violence. Israel blames incitement by Palestinian leaders and media for the continuing attacks.

West Bank settlements are seen as illegal under international law as well as major stumbling blocks in peace efforts since they are built on land Palestinians view as part of their future state. HRW points to foreign firms operating in Area C of the West Bank to the benefit of settlements while "Israel all but bars Palestinians from building or extracting natural resources" in the zone. Two examples it highlights include Germany's Heidelberg Cement and U.S.-based Remax real estate. Heidelberg told HRW that it believed its Nahal Raba quarry "does not infringe the human rights and livelihoods of the Palestinian people" and provided Palestinians with well-paid jobs. Remax did not respond to HRW or to an email from Agence France-Presse (AFP), but has said previously that its offices are independently owned and operated.
Last Update: Jan 19, 2016 1:45 pm
RELATED TOPICS