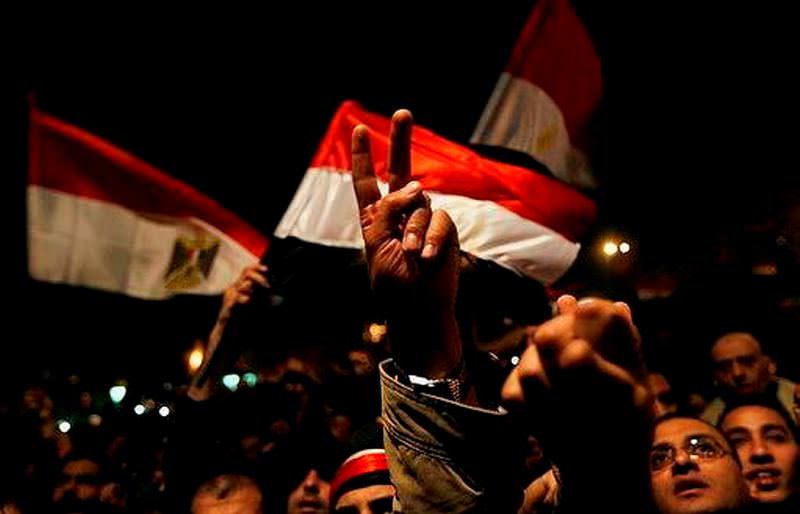 Egyptians prepare to mark the fifth anniversary of the 2011 revolution that toppled former Egyptian President Hosni Mubarak who had ruled the country for three decades.
by daily sabah Jan 25, 2016 12:00 am

Thousands of Egyptians want to mark the fifth anniversary of the revolution that was considered to be the start of a democratic system, but President Abdel Fattah el-Sissi, who led a military coup in 2013, warned against demonstrations

Egyptians mark the fifth anniversary of the 2011 revolution that toppled autocrat president Hosni Mubarak. Egypt was a stop for the so-called Arab Spring that euphorically swept across the region. However, Egyptian President Abdel Fattah el-Sissi who led a military coup in 2013 that toppled Egypt's first democratically elected president, Mohammed Morsi, said that the anniversary of the country's 2011 uprising should be celebrated and that the country is on the right track, although democracy will take time to develop. Yesterday, a day before the fifth anniversary of the popular uprising that toppled longtime ruler Hosni Mubarak, el-Sissi said that "democratic experiences don't mature overnight, but through an accumulative and continuous process." He added that: "Egypt today is not the Egypt of yesterday, we are building together a modern developed civilian state." El-Sissi also accused the banned Muslim Brotherhood group of trying to exploit the uprising for personal gain.

Touching on the ongoing conflict with militants in Sinai he said "Don't let their blood go in vain and, by the way, we will not allow that ourselves, and I am saying that so everyone listens and takes note. "El-Sissi made no mention of the January 2011 uprising in his comments. He has in the past paid tribute to the uprising, just as he has done to the so-called 'June 30 revolution,'" AP reported.

The Muslim Brotherhood was the largest political movement in Egypt and was delivering aid, social services and education facilities across the country with a moderate Islamist ideology, seeking to end poverty, impoverishment, foreign intervention, unemployment, social problems and corruption. Since the first day of its establishment in 1928 by Hassan al-Benna, who was killed in 1949, the group never resorted to violence but preferred to remain in legal politics and separated itself from radical groups that adopted the Salafist and Wahhabi understanding of Islam like al-Qaida. The Muslim Brotherhood was familiar with politics, as it was struggling to grab seats in parliament in the Mubarak era. The group entered parliamentary elections and presidential elections. The popularity, reliability and fact-based words brought Muslim Brotherhood-supported Morsi to power after he received more than 50 percent of the votes.

After El-Sissi took power, the international community voiced its concern weakly against the human rights violations, mass death sentences, arbitrary detentions and the suppression of all opposition groups by the Sissi rule, despite the repeated warnings of rights groups. Moreover, the U.S. did not condemn the mass killing of people in Egypt as happened in Rabaa Square in 2013. The systematic and widespread killing of at least 817 demonstrators by Egyptian security forces in July and August 2013 probably amounts to crimes against humanity, Human Rights Watch (HRW) said in a report, released in 2014.
RELATED TOPICS