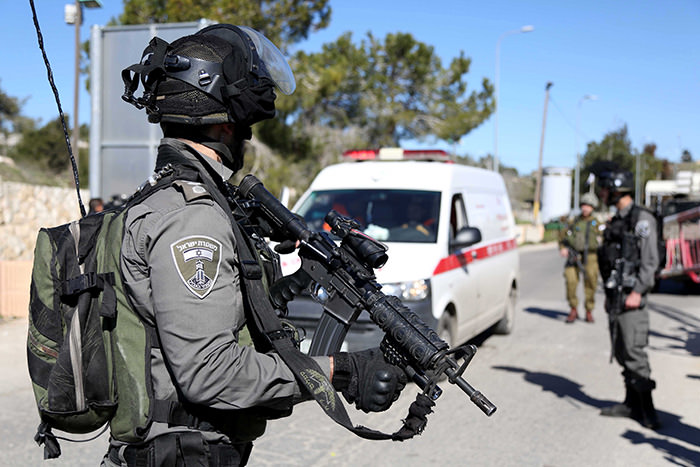 The Israeli military has sealed off the occupied West Bank city, as part of measures taken following the shooting of three Israeli soldiers. According to the measure, only Ramallah residents and humanitarian workers will be allowed entry into the city

Israel blocked non-residents from Ramallah yesterday after a checkpoint shooting wounded three soldiers, keeping commuters out of the West Bank city where the Palestinian Authority is based.

"In accordance with situation assessments following yesterday's shooting attack in Beit El, security measures have been taken in the area and only residents of Ramallah are allowed to enter the city," a military spokeswoman said.

Sunday's attack saw a Palestinian, who had worked as a guard for the attorney general's office in Ramallah, open fire at a checkpoint outside the city, wounding three Israeli soldiers before being shot dead. It was the latest in four months of Palestinian knife, gun and car-ramming attacks targeting Israelis. Most of the attacks have been stabbings, though shootings have occasionally occurred.

A military spokeswoman said on Monday that a decision on when to lift the measure would depend on security assessments, with Israel seeking to halt the wave of attacks. It was not clear when the last time such a move had been taken by Israel, though heavy restrictions were put in place during the second Palestinian intifada, or uprising, between 2000 and 2005.

Sunday's shooting marked at least the second time a Palestinian security officer had been implicated in an attack in the current wave of violence. The checkpoint where it occurred, regularly used by diplomats, journalists and humanitarian workers, was closed on Monday morning, an AFP journalist reported.

A number of other roads connecting Ramallah with the northern West Bank were also closed or restricted, although checkpoints near Jerusalem were open. Later in the day, it appeared that enforcement of the measure varied between locations.

A large number of Palestinians, aid workers and diplomats commute to Ramallah for work or other reasons on a daily basis. While diplomats were not directly impacted, "the travel restriction on Palestinians is having an effect in terms of our ability to engage," one Western diplomat said. "A number of meetings have been called off because Palestinian interlocutors have not been able to get to the meeting site."

Palestinians queuing to leave Ramallah said they considered the measure to be punishment for Sunday's attack.

Violence since October has killed 25 Israelis, as well as an American and an Eritrean, according to an AFP count. At the same time, 161 Palestinians have been killed by Israeli forces, most while carrying out attacks, but others during clashes and demonstrations. The checkpoint shooting was one of two attacks on Sunday.

Later in the day, an attempted car-ramming occurred at a military checkpoint in the West Bank north of Jerusalem, with the attacker shot and taken to hospital for treatment, Israel's military said. No Israelis were reported wounded. On Monday morning, a 17-year-old Palestinian was shot dead after trying to stab soldiers near the Jewish settlement of Salit in the West Bank, Israel's army said. Salit is near Israeli territory, not far from Tel Aviv.

Some analysts say Palestinian frustration with Israel's occupation of the West Bank, the complete lack of progress in peace efforts and their own fractured leadership have helped feed the unrest. Israel blames incitement by Palestinian leaders and media as a main cause of the violence.

Many of the attackers have been young people, including teenagers, who appear to have been acting on their own.

Israel occupied East Jerusalem and the West Bank during the 1967 Middle East War. It later annexed the holy city in 1980, claiming it as the capital of the self-proclaimed Jewish state – a move never recognized by the international community.

Palestinians, for their part, continue to demand the establishment of an independent state on the Gaza Strip and the West Bank with East Jerusalem, currently occupied by Israel, as its capital.