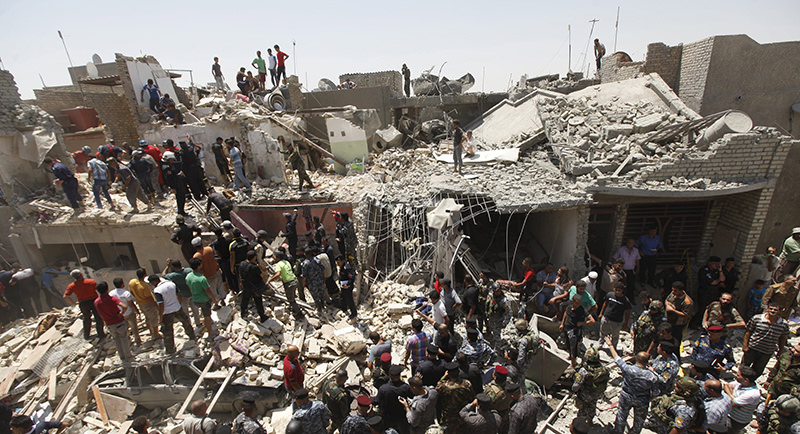 People stand outside damaged houses after an Iraqi plane accidentally dropped a bomb in Ni'iriya district in Baghdad July 6, 2015 (Reuters Photo)
by Feb 03, 2016 12:00 am
Iraqi security forces have begun building a concrete wall surrounding the capital Baghdad in a bid to prevent attacks by Daesh terrorists, a military statement said on Wednesday.

Daesh, the terrorist group that seized vast swathes of territory north and west of Baghdad, claimed several attacks in recent months in the Iraqi capital. The last one, on Jan. 11, targeted a shopping mall and killed at least 18 people, according to police sources.

The planned security barrier will surround the city from all sides, said Baghdad Operations Command's head Lieutenant-General Abdul Ameer al-Shammari, in a statement published on the defence ministry's website. The preparatory work on the wall started on Monday, he said.

"The security barrier around Baghdad will prevent terrorists from infiltrating the capital or smuggling explosives and car bombs to target innocent civilians," he said.

Construction will start in the area of al-Subaihat, around 30 km (20 miles) to the west of Baghdad, so as to isolate it from Falluja, a long-time bastion of terrorists now under control of Daesh.

Many districts in the Iraqi capital are now surrounded by concrete fences dating back to the strife that pitted Sunnis and Shi'ites about a decade ago.

Some of these concrete walls will be dismantled in the districts that are no longer deemed under threat, and used in the new wall around Baghdad, along with surveillance camera and explosives detection devices, Shammari said.

The walls and barriers around the so-called Green Zone are expected to remain. Created by the U.S.-led coalition that toppled Saddam Hussein in 2003, this heavily fortified zone now houses the government, parliament and many embassies including those of the U.S. and Britain.