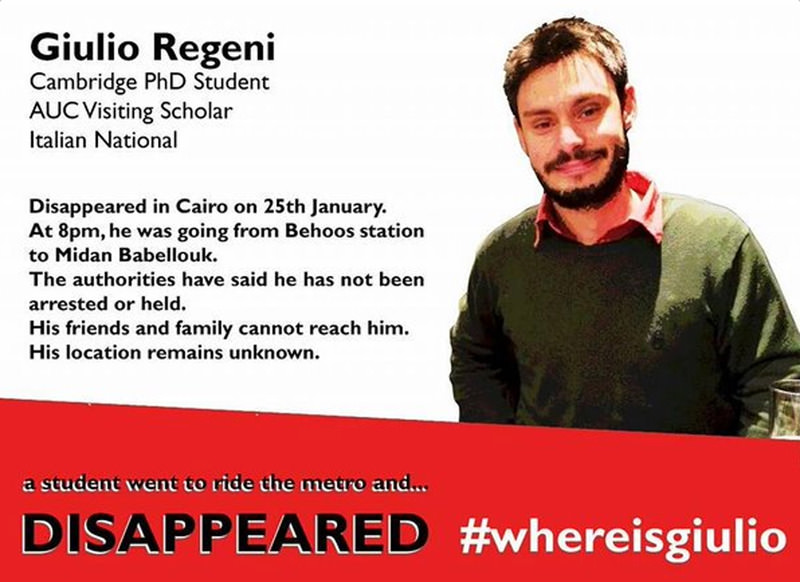 by Associated Press Feb 07, 2016 12:00 am
A second autopsy on the body of an Italian found slain in Egypt reveals that the doctoral student suffered "inhuman, animal-like" violence, Italy's interior minister said Sunday as he pressed Egypt's president to fully cooperate with the criminal investigation.

Rome prosecutors have opened a murder investigation into the death of Giulio Regeni, whose battered corpse was found near a highway outside Cairo nine days after he was reported missing in the Egyptian capital.

Italy's ambassador, who viewed the body a few hours after Egyptian authorities told Italy about its discovery on Feb. 3, had already said the victim showed signs of a brutal beating and torture,

A second autopsy, following one done in Egypt by authorities there, was performed late Saturday in Rome after the body was flown to Italy, concluded that Regeni died after a cervical vertebra was broken, said Alessandra Ballerini, a human rights lawyer appointed by the young man's family to follow developments in the case.

Interior Minister Angelino Alfano said on a Sky TV interview show Sunday that he still hasn't gotten his breath back after learning the shocking results of the latest autopsy.

Ballerini said full autopsy results won't be ready for a few days. Among those, crucially, are tissue and fluid samples that could determine just how long after Regeni's Jan. 25 disappearance he died.

The Italian news agency ANSA, citing unidentified sources close to the Italian coroners, said the findings led to the conclusion that Regeni's neck was twisted or struck, breaking a vertebra and leaving him unable to breathe. It said he suffered various other fractures as well.

"We had to view the results of the autopsy," Minister Alfano said, referring to Italian authorities. Regeni suffered "something inhuman, animal-like, an unacceptable violence," he said.

Alfano pressed Egyptian President Abdel Fattah el-Sissi to ensure cooperation in the investigation, noting that Italian police dispatched to Cairo on Saturday started working with their Egyptian counterparts on the case.

"I am convinced that it is in the interest of el-Sissi to work together," Alfano said. "No one can bring Giulio back to life, but bring the truth to the surface will perhaps be able to save more lives."

For years, rights groups have accused Egyptian police of regularly torturing detainees. Over the past year, they have also accused them of using "forced disappearances" detaining suspected activists or Islamists in secret without reporting their arrest.

The Egyptian Association for Rights and Freedoms documented 314 such disappearances in 2015, according to a lawyer, Halem Henish. Most later turned up in prison, but at least five were found at the morgue, including one with signs of torture like burns and electric shocks. He said the group has documented 35 disappearances so far in 2016, including at least two of whom have died.

News reports in Italy have said Italian authorities strongly suspect Egyptian security forces interrogated Regeni to learn about the contacts he made as part of his research with the labor world and other activists, and tortured and killed him.

In an interview with Italian newspaper Corriere della Sera, Egypt's foreign minister vehemently denied those allegations as "judgments, accusations and insinuations, unjustified and without proof."

Sameh Shoukry also was quoted in the interview as denying that Egyptian security forces have a tendency to use violent methods.

"Any method against the law is totally condemned by the government and will be brought to justice," Shoukry was quoted as saying. "Are there sometimes individual excesses? Certainly there are, and we need to improve the culture against these excesses and have monitoring to assure they don't occur."

Separately, a spokesman for the Egyptian Interior Ministry dismissed allegations that security forces could have been responsible for Regeni's killing. Spokesman Abu Bakr Abdel-Karim called that theory "nonsense," the private Shrouq newspaper reported.

Regeni had been in Cairo for a few months, as part of his Ph.D. research into Egyptian labor movements. According to friends, Regeni was last seen entering a subway station to go meet a friend in downtown Cairo on the anniversary of Egypt's 2011 uprising. Security forces were on high alert and heavily present in the streets to prevent any demonstrations.

On Jan. 31, the Italian foreign ministry in an unusually candid statement, called on Egypt to put "maximum effort" into finding Regeni, after saying the young man "mysteriously disappeared."

After the body's discovery was first revealed, some Egyptian authorities initially attributed Regeni's death to a road accident.

The date for Regeni's funeral was still being decided, said family lawyer Ballerini.

"Giulio had a lot of friends scattered throughout the world" and they will need a few days to travel to his hometown of Fiumicello in northeastern Italy, she said.