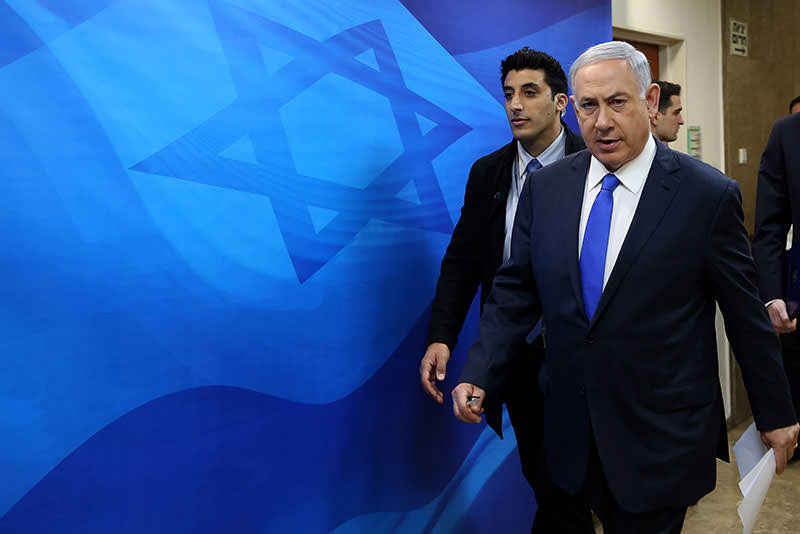 Israeli Prime Minister Benjamin Netanyahu arrives for the weekly cabinet meeting at his Jerusalem office, 07 February 2016. (EPA)
by Anadolu Agency Feb 07, 2016 12:00 am
Israeli Prime Minister Benjamin Netanyahu has called for a group of Arab-Israeli lawmakers who recently visited the families of alleged Palestinian attackers to be banned from serving in the Knesset (Israel's parliament).

On Sunday, Netanyahu accused three Arab-Israeli lawmakers of "going to comfort the families of murderers" and refusing to integrate into Israeli society.

"I would like to examine new and reinforced legislative changes to ensure that anyone who acts in this direction will not serve in the Israeli Knesset," he said.

"I think this is an important statement as to what kind of society we want," Netanyahu added.

The Israeli government frequently accuses Palestinian politicians and Arab-Israeli lawmakers of "inciting" a recent wave of violence that has left 30 Israelis and foreigners dead since Oct. 1 of last year.

Over the same period, more than 160 Palestinians have been shot dead by Israeli security forces after alleged attacks on Israelis or during the violent dispersal of protests.

Last week, Arab-Israeli lawmaker Haneen Zoabi hit back at Israeli criticisms of her recent meetings with the families of alleged attackers. She went on to assert that the alleged attackers were "defending national and human dignity".

She went on to denounce the Israeli policy of holding the bodies of Palestinians killed in the wake of alleged attacks.

The Times of Israel reported on Sunday that an Israeli court had slapped Zoabi -- one of the Knesset's most outspoken Arab members -- with a six-month suspended jail sentence and a $750 fine for "insulting" Israeli police officers of Arab origin.

Over the course of the last four months, Israel has passed a raft of new security measures related to alleged Palestinian attacks on Israelis, which mostly involve alleged knife or vehicular attacks.

Most recently, the Knesset approved measures that would allow Israeli police to strip search anyone considered "suspicious".

Other recently-approved measures include allowing security forces to open fire on stone-throwing protesters; longer prison sentences for minors accused of stone-throwing; the demolition of the homes of Palestinian suspects; and retention of the dead bodies of alleged Palestinian attackers.
Last Update: Feb 07, 2016 6:56 pm
RELATED TOPICS