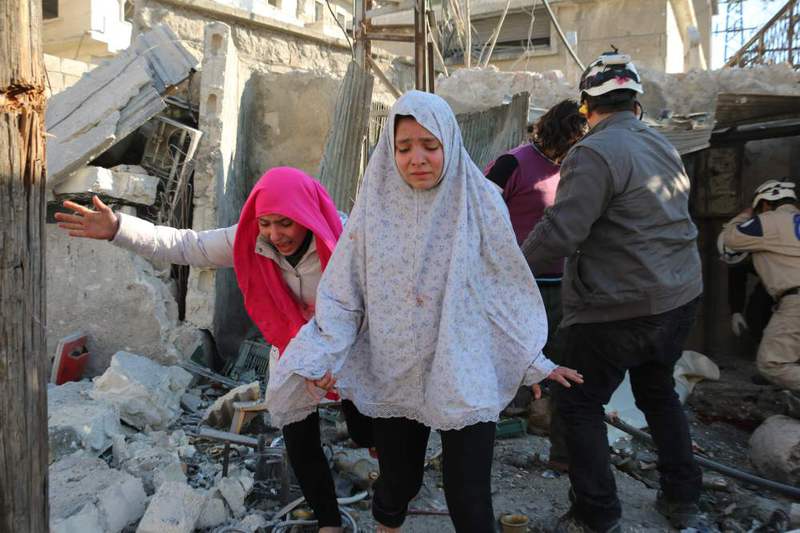 Syrian girls react following a reported Syrian regime airstrike in a rebel-controlled area in the northern city of Aleppo on Feb. 8.
by Daily Sabah with Wires Feb 10, 2016 12:00 am

The HRW accused the joint Syrian-Russian military operation in Syria of using internationally banned cluster bombs, urging Russia to ensure the protection of civilians and end indiscriminate attacks that have killed hundreds of civilians

London-based HRW said the attacks killed at least 37 civilians, including six women and nine children, and wounded dozens. HRW said the International Syria Support Group (ISSG) that will meet in Germany on Thursday "should make protecting civilians and ending indiscriminate attacks, including with cluster munitions, a key priority."

"Any solution [to] the Syrian crisis needs to address ongoing indiscriminate attacks," Nadim Houry, deputy Middle East director of HRW, said. "A good place to start would be a commitment by Russia and Syria to stop using cluster munitions."

The ISSG includes 17 regional and world powers trying to end Syria's conflict, which has killed more than 250,000 people and already driven 11 million from their homes since it began in March 2011.

HRW said it received photographs taken by locals that show "the remnants of an RBK-500 series bomb and ShOAB-0.5 submunitions."

"Whether or not Russia dropped these cluster munitions, it is operating jointly with the Syrian government and as such has a responsibility to ensure that Russian-Syrian operations are not using indiscriminate weapons," Houry said.

Meanwhile, the Syrian Network for Human Rights (SNHR) said in a Monday report that forces of Syrian President Bashar Assad's regime dropped at least 5,238 barrel bombs since September 2015 when the Russian air campaign started. Toxic gas was also used in some of the barrel bombs, according to HRW. A total of 1,428 of the barrel bombs were used in January this year, and the majority of these bombs – 1,123 in total – were dropped in rural areas of Damascus, the report said. The regime forces had launched the first barrel bomb in Idlib in 2012, it added. The group also documented 189 deaths in various cities of the country since September, where 36 of those killed were children and 26 were women.

Another opposition group, the Syrian National Coalition, warned against a new civilian massacre in the western Damascus suburb of Darayya. The group said around 12,000 civilians –the majority of them children and women – face the risk of a massacre by Assad forces backed by Iranian Revolutionary Guards after the forces besieged the area. More than 80 percent of Darayya has been destroyed, and 90 percent of the residents have fled from the area, according to local Syrian sources.

Al-Jazeera reported that the intensified use of the explosives came as the Syrian regime began seizing territory in the provinces of Aleppo, Idlib, Damascus, Homs and Hama, causing thousands of people to flee to the Turkish border.

The United Nations warned yesterday that hundreds of thousands of civilians could be cut off from food supplies if Syrian government forces encircle rebel-held parts of Aleppo. The assault to surround Aleppo, once Syria's biggest city with 2 million people, amounts to one of the most important shifts of momentum in the more than five-year-long civil war.

European Council President Donald Tusk also denounced Russian air strikes in Syria as helping the "murderous" Assad government and triggering fresh waves of refugees fleeing toward Europe. The war in Syria has caused millions to flee from their homes and is one of the main drivers of Europe's worst migration crisis in decades. The influx has divided European Union members, who cannot agree on how to tackle it. "Russia's actions in Syria are making an already very bad situation even worse," Tusk said in brief comments on greeting new Georgian Prime Minister Giorgi Kvirikashvili as he arrived in Brussels. "As a direct consequence of the Russian military campaign, the murderous Assad regime is gaining ground, the moderate Syrian opposition is losing ground and thousands more refugees are fleeing toward Turkey and Europe," Tusk said.

Russia recently began launching airstrikes in Syria to bolster the Assad regime. Moscow initially described the airstrikes as solely targeting DAESH targets, but Russian warplanes have repeatedly targeted civilian areas and the moderate opposition groups that control them. According to a report released earlier this month by Amnesty International, Russian airstrikes in Syria have killed "hundreds" of civilians over the last three months.
RELATED TOPICS