Abadi urges KRG to drop plans for independence, saying region could not do without Iraq 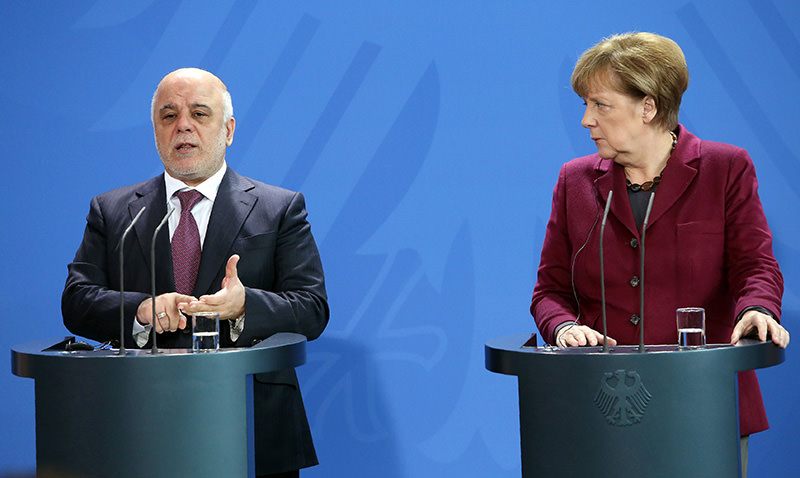 German Chancellor Angela Merkel (R), Iraqi PM Haider al-Abadi in a joint press conference at Chancellery in Berlin on Feb 11, 2016. (AFP)
by Daily Sabah with Agencies Feb 11, 2016 12:00 am
Iraqi Prime Minister Haider al-Abadi on Thursday urged the Kurdistan Regional Government (KRG) to drop any plans for independence, warning that the autonomous northern region could not do without Iraq.

"The Kurdistan region will not develop without Iraq, and Iraq must be united in all its components," he said following talks in Berlin with German Chancellor Angela Merkel.

"Kurdistan is part of Iraq and I hope it will remain so," he said.

At the beginning of February, Iraqi Kurdish leader Masoud Barzani declared that the "time has come" for the country's Kurds to hold a referendum on statehood.

"The time has come and the conditions are now suitable for the people to make a decision through a referendum on their future," Barzani said in a statement.

"This referendum would not necessarily lead to (an) immediate declaration of statehood, but rather to know the will and opinion of the people of Kurdistan about their future," said Barzani, who has remained in power despite the expiration of his term as president.

Barzani, who has made similar calls in the past, did not specify when the vote would take place.

But, even if the various political challenges to the KRG's independence are resolved, the major economic problems the region faces due to low oil prices are another bar to its independence.

Turkey's assent would also be essential for moves toward Kurdish statehood to proceed, as Ankara is a key economic partner of Iraqi Kurdistan, both in terms of oil exports and other trade and investments.
Last Update: Feb 11, 2016 5:21 pm
RELATED TOPICS