Iraq fully recaptures Ramadi, has no money to rebuild 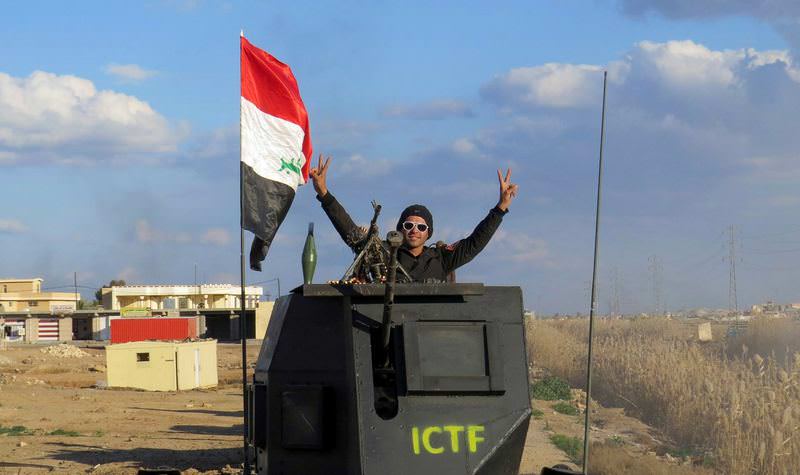 A member of teh Iraqi security forces celebrate the victory after DAESH militants were driven out of Ramadi's outskirts.
by Daily Sabah with Wires Feb 11, 2016 12:00 am

Iraqi government said that Ramadi is fully free of DAESH militants. However, the financial troubles of the Baghdad administration will likely to slow down the rebuilt of the city fall of oil prices have heavily harmed the economy

Iraqi government forces have regained full control of Ramadi after pushing DAESH fighters out of the city's outskirts, according to Iraqi security forces and the U.S.-led coalition. The announcement, more than a month after Ramadi was first declared liberated in December, underscores the slow nature of Iraqi ground operations despite heavy backing from U.S.-led coalition airstrikes. The governor of Anbar province praised Iraqi security forces and the U.S.-led coalition for their work to "liberate Ramadi completely," but was quick to emphasize that critical security and humanitarian issues remained. Violence has emptied Ramadi of civilians and much of the city remains blanketed in homemade bombs, also called improvised explosive devices or IEDs, which DAESH laid in retreat. Col. Steve Warren, a spokesman for the coalition, told The Associated Press that Iraqi security forces have control of the whole city but "untold thousands" of improvised explosive devices were left behind.

Iraqi government troops, led by the country's elite counterterrorism forces, pushed DAESH out of the center of Ramadi in December, but struggled to take control of the city's outskirts. Explosives were a main factor that slowed the clearing of neighborhoods. Now, Anbar's governor says the bombs are preventing civilians from returning home.

Iraqi forces allied with the government have clawed back pockets of territory from the extremist group in recent months, but destruction and insecurity in many of the "liberated" areas has prevented large-scale returns of civilians. The U.S.-led coalition estimated last year that DAESH had lost 40 percent of the territory it once held in Iraq, but the United Nations estimates more than 3 million Iraqis remain internally displaced by violence, insecurity and destruction.

Efforts to clear Ramadi of explosives have been slowed by a lack of funding, Rawi said, explaining that Iraq's economic crisis has left the province in debt and entirely reliant on international aid donations to rebuild. An Initial assessment of destruction in Ramadi carried out by the U.N. last month said more than 4,500 buildings has been damaged or destroyed during the battle to reclaim the city. "The level of destruction in Ramadi is as bad as anything we have seen in Iraq," said Lise Grande, the U.N.'s deputy special representative to Iraq. Iraqi and coalition officials estimate that rebuilding Ramadi could cost hundreds of millions of dollars. "The key right now is to extract the IEDs (improvised explosive devices). This is the single largest, most difficult obstacle preventing people from coming home and rebuilding their lives," said Grande. "Houses are destroyed, bridges are destroyed, roads are infested with IEDs, water systems are ruined, schools are ruined, health centers are ruined and businesses are shut," she added.

Ramadi's hundreds of thousands of residents will not be able to go home until bombs are removed and infrastructure damaged by six months of fighting is rehabilitated - operations that require tens of millions of dollars Baghdad cannot spare. Iraq, with income nearly exclusively from oil, is struggling to pay its bills amid the fall in global crude prices. Anbar Governor Sohaib al-Rawi said his provincial government had not received its share of the federal budget in about two months. "The local government has accumulated debts from last year which will be paid from this budget," al-Rawi told reporters in Baghdad, declining to define the size of the debt. Besides U.N.-funded activities, he said efforts to prepare Ramadi for the return of civilians were being financed "through local efforts" of provincial authorities, without providing details. Unless additional funds are provided, it could take nine months for those efforts just to clear Tamim, a large district in southern Ramadi where the first phase of U.N. efforts will be conducted, according to Grande.

Ramadi fell to DAESH in May 2015 in the largest defeat for Iraq's military since Mosul fell in 2014. At the height of the group's strength, DAESH controlled more than a third of Iraqi territory before a U.S.-led campaign of airstrikes began in August 2014.
RELATED TOPICS