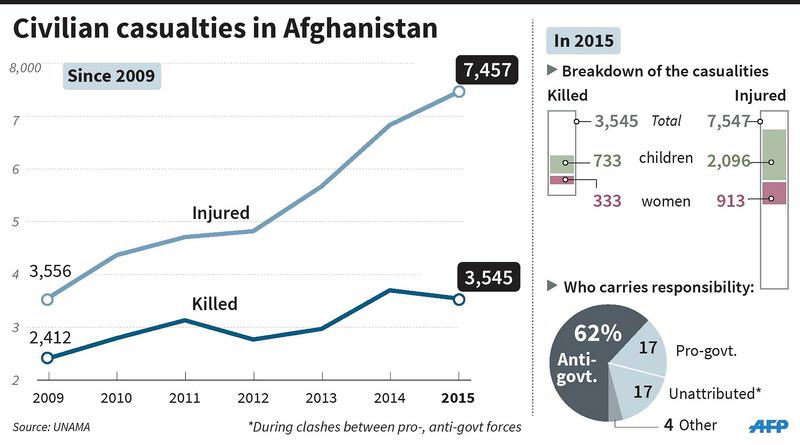 A report released by the U.N. showed that civilian casualties in Afghanistan have hit a record since 2009 as the stalemate between the Taliban and government forces has become bloodier

Civilian casualties of the war in Afghanistan rose to record levels for the seventh year in row in 2015, as violence spread across the country in the wake of the withdrawal of most international troops, the United Nations reported on Sunday. At least 3,545 noncombatants died and another 7,457 were injured by fighting last year in a 4-percent increase over 2014, the international organization said in its annual report on civilian casualties. "The harm done to civilians is totally unacceptable," Nicholas Haysom, the head of the U.N. Assistance Mission in Afghanistan, said in a statement. Increasingly desperate fighting between Western-backed government forces and insurgent groups meant more noncombatants are being caught in the crossfire, investigators wrote. Ground engagements were the leading cause of civilian casualties at 37 percent, followed by roadside bombs at 21 percent and suicide attacks at 17 percent. Women and children were especially hard hit, as casualties among women spiked 37 percent while deaths and injuries increased 14 percent among children. Casualties attributed to pro-government security forces jumped 28 percent compared to 2014, for 15 percent of the total. A 9-percent rise in civilian casualties caused by international military forces was attributed largely to a U.S. air strike in October on a Doctors Without Borders hospital that killed 42 staff, patients, family members and injured another 43. Overall 103 civilians were killed and 67 wounded by foreign forces last year, the report found.

As in past years, insurgent groups like the Taliban were blamed for the majority of civilian deaths and injuries, at 62 percent. Investigators accused insurgents of increasingly using tactics that "deliberately or indiscriminately" caused harm to civilians. Residents in the north and south were particularly hard hit as Afghan security forces struggled to hold off resurgent Taliban offensives in Kunduz and Helmand provinces, among other areas. "The report references commitments made by all parties to the conflict to protect civilians, however, the figures documented in 2015 reflect a disconnect between commitments made and the harsh reality on the ground," said Danielle Bell, director of the U.N. human rights program in Afghanistan. "The expectation of continued fighting in the coming months combined with the current levels of civilian casualties, demonstrate the critical need for immediate steps to be taken by all parties to the conflict to prevent harm to civilians," she said. Since the United Nations began systematically recording civilian casualties in Afghanistan in 2009, it has documented nearly 59,000 deaths and injuries.

The report criticized Afghan forces in particular for their reliance on explosives in populated areas. U.S. and other international troops moved from a combat to training, advisory and assistance role in Afghanistan on January 1, 2015, leaving Afghan forces to take the lead in fighting the resurgent militants as they targeted towns and cities. "Why did they fire this rocket? Why was it necessary?" the father of a man killed in shelling by the Afghan army in a village in Wardak province in December was quoted as saying in the report. Nine people died in that attack, according to the report, highlighting the dangers to civilians during ground engagements. "Can you imagine how difficult it is when your son is lying in his own blood and you are crying for him?" the father is quoted as saying.

The statistics in the report do not "reflect the real horror", Haysom told a press conference Sunday. "The real cost... is measured in the maimed bodies of children, the communities who have to live with loss, the grief of colleagues and relatives, the families who make do without a breadwinner, the parents who grieved the lost children, the children who grieved the lost parents," he said. One in every four casualties in 2015 was a child, with the report documenting a 14 percent increase in child casualties over the year. "Tell these people not to attack children," it quotes a 12-year-old survivor of a mortar attack that killed four others as saying. "I want to study, not to die."

Women also paid a heavy price, with a 37 percent surge in female casualties. One in every ten casualties recorded was a woman, the report said. The document highlighted an increase in women being targeted for alleged moral crimes, calling the executions and lashings a "disturbing trend", and saying the U.N. plans to release a separate report on such incidents soon. Chillingly, the report documented a doubling of civilian casualties due to the deliberate targeting by militants of judges, prosecutors and judicial institutions. There were 188 such cases last year, of which 46 involved fatalities. The Taliban claimed 95 percent of such targeted attacks, the report said. While ground engagements were the largest cause of civilian casualties, improvised explosive devices came second, the report said, adding that the use of such weaponry violated international law and could constitute war crimes.
RELATED TOPICS