Iraqi government to shrink paramilitary forces due to financial crisis 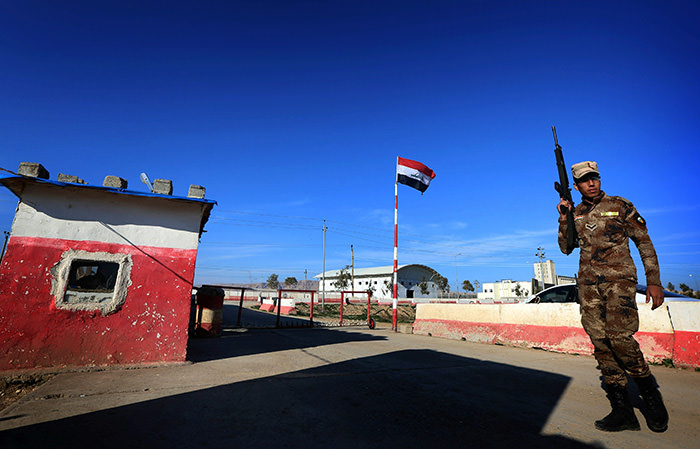 An Iraqi army member stands guard at the entrance of the Nineveh base in Makhmur, north of the capital Baghdad, on February 11, 2016 (AFP Photo)
by Associated Press Feb 18, 2016 12:00 am
The Iraqi government has decided to cut the number of state-financed paramilitary forces due to a shortage of funds as the international oil price declines, a spokesman for a leading predominantly Shiite militia group said Thursday.

Karim al-Nouri, the spokesman for the Popular Mobilization Forces, an umbrella group made up mostly of Shiite militias, told The Associated Press that around 30 per cent of paramilitary troops were expected to be laid off. Some 130,000 fighters in Iraq are affiliated with pro-government paramilitary forces.

The decision would not affect the fight against the Daesh group, which controls large areas in northern and western Iraq, al-Nouri also said, adding that the cuts will also cover non-combat troops providing administrative and logistical support. He did not give details on how many combat troops will be laid off.

In an interview with the state TV on Monday, Iraqi Prime Minister Haider al-Abadi hinted that there is corruption inside the paramilitaries, with some members being on payroll lists without showing up.

In mid-2014, several Shiite militias along with volunteers joined the fight against Daesh after large divisions of Iraq's military fled rapidly in the face of the militant group's advance. A number of Sunni tribes later joined the fight.

It is unlikely the cuts to paramilitary funding will lead to front-line defeats as Iraq's army is receiving support from the U.S.-led coalition against Daesh.

Iraq's oil-reliant economy has been severely hit by falling crude prices, and the war on terror is proving costly for the cash-strapped government. Iraq has the world's fourth largest oil reserves and oil revenues make up nearly 95 percent of its budget.