UN says a 'humanitarian catastrophe' is unfolding in Yemen 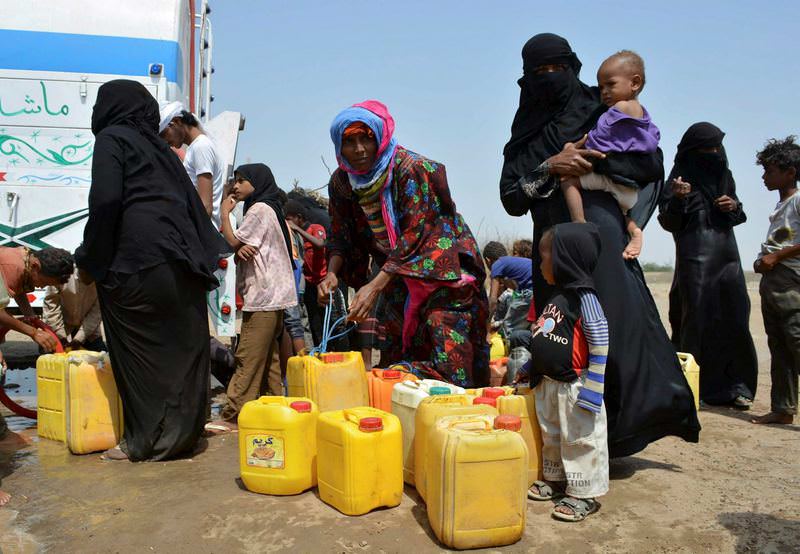 by Associated Press Feb 18, 2016 12:00 am
The U.N. humanitarian chief warned Tuesday that a "humanitarian catastrophe" is unfolding in Yemen, exacerbated by increasing restrictions on efforts to respond to the staggering needs of millions of people including the diversion of a U.N. aid ship by Saudi-led coalition forces. Stephen O'Brien painted a grim picture of the war-ravaged country: more than 35,000 casualties since March 2015 including over 6,000 deaths; at least 7.6 million people "severely food insecure;" more than 3.4 million children now out of school; and nearly 600 health facilities and over 1,170 schools unfit for use because of the conflict. O'Brien's briefing to the U.N. Security Council, requested by Russia, was the first focusing on the humanitarian crisis sparked by the country's civil war.

Yemen's conflict pits the government, backed by the Saudi-led coalition, against Shiite rebels known as Houthis, allied with a former president. The Houthis took over the capital Sanaa in September 2014, and the Saudi-led coalition began airstrikes against the Houthis in March 2015. Al-Qaida militants, southern separatists, and other militants have capitalized on the chaos of the civil war. O'Brien said he is "extremely concerned" about increasing restrictions on humanitarian access and deliveries, and he blamed all parties. He said the Houthis and their allies are inconsistent in allowing access to areas they control, noting that over the past week some U.N. agencies were given approvals but others were denied for missions to Ibb, Taiz and Saada. He said aid deliveries are continuing in areas where Al Qaida in the Arabian Peninsula is present, but movement "is extremely challenging and dangerous." He said access to northern governorates, where needs are among the most severe, is challenging because of coalition airstrikes and fighting, especially along the Saudi border. O'Brien said recent communications from Saudi Arabia on the safety of humanitarian workers in Houthi-controlled areas have "impacted the humanitarian community's planning, causing delays to important missions over the past two weeks."

This follows Saudi Arabia's denial of entry to the U.N. regional humanitarian coordinator on Jan. 17, and the diversion of a ship chartered by the U.N. World Food Program to bring humanitarian supplies from Djibouti to the Yemen port of Hodeidah to the Saudi port of Jizan on Feb. 11 by coalition forces. A Saudi note dated Feb. 5 and obtained by The Associated Press advised international organizations and aid agencies "to move any offices and staff they may have in regions where the Houthi militia and their supporters are active and in areas where there are military operations." O'Brien responded on Feb. 7 that the humanitarian community was delivering life-saving assistance and would continue to do so across Yemen, "impartially and on the basis of need." The Saudis responded the following day saying the coalition's request "is consistent with its obligations under international humanitarian law and, in no way, can be misinterpreted to indicate any hindrance to humanitarian access and the delivery of humanitarian assistance in Yemen."

Philippe Bolopion, deputy director for global advocacy at Human Rights Watch, said the Saudi warning, "given the coalition's track record of violations of the laws of war," could be constructed as a threat to humanitarian workers in Houthi areas. "Coalition members should be under no illusion that this warning absolves them of their obligation to distinguish between civilian and military objects, and to protect humanitarian personnel and facilities from attack," he said. O'Brien urged the Security Council to demand that all combatants facilitate unconditional humanitarian access to all parts of Yemen and to take greater measures to protect civilians. He also urged donors to urgently support an appeal to be launched in two days for $1.8 billion for critical needs in Yemen. The Security Council urged donors to be generous and urged all parties to fulfill their obligations under international humanitarian law, facilitate the delivery of humanitarian aid and commercial goods including fuel for civilian purpose to all parts of Yemen, and "ensure rapid, safe and unhindered humanitarian access."
RELATED TOPICS