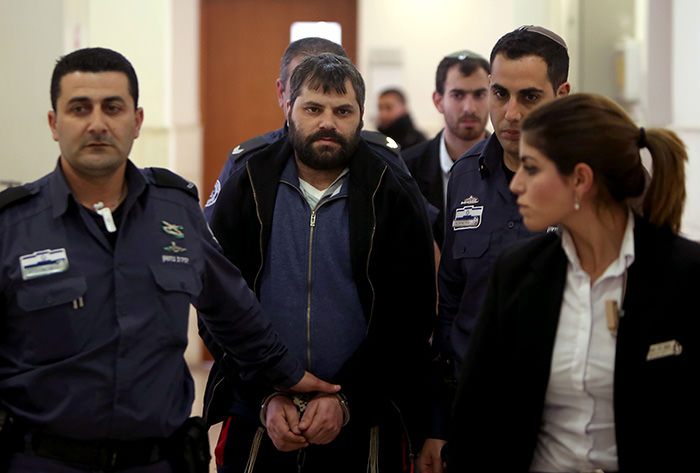 Yosef Haim Ben-David (2L) who is the prime suspect charged with the abduction and murder of the Palestinian teenager Mohammed Abu Khdeir. February 11, 2016 (AFP Photo)
by Compiled from Wire Services Feb 23, 2016 12:00 am
A psychiatrist has ruled that an Israeli found to have led the burning alive of a Palestinian teenager in 2014 was responsible for his actions, the lawyer for the victim's family said Tuesday.

The court found that Israeli settler Yosef Haim Ben-David, 31, was the ringleader of the chilling attack, but his lawyers submitted last-minute documents saying he suffered from mental illness.

The court appointed a psychiatrist who "concluded that the principal accused lied about his mental state to avoid judgement," lawyer Mohannad Jbara said.

An Israeli court sentenced two young Israelis to life and 21 years in prison on Feb. 4 for the burning alive of a Palestinian teen, part of a cycle of violence that led up to the 2014 Gaza war.

The two Israelis were minors at the time of the chilling attack in which they and a third man snatched Mohammed Abu Khdeir, 16, from an east Jerusalem street and subsequently killed him.

Muhammad Abu Khdair, 16, was forced into a car outside his East Jerusalem home on July 2, 2014. The three suspects beat him unconscious before driving to a forest and burning him to death while he was still breathing. His charred body was found hours later.

His murder was seen as revenge for the killing of Israeli teenagers Naftali Frenkel, Gilad Shaer and Eyal Yifrach, who were abducted from a hitchhiking stop near the flashpoint West Bank city of Hebron.

Israeli authorities said the suspects had decided to kill an Arab and equipped themselves with cables, petrol and other materials before randomly choosing Abu Khdeir.

Ben-David's case comes with tensions once again high, with a wave of Palestinian knife, gun and car-ramming attacks since last October.

The violence has claimed the lives of 27 Israelis, as well as an American and an Eritrean.

In addition, 176 Palestinians have been killed by Israeli forces, most while carrying out attacks but others during clashes and demonstrations.

The last-minute legal manoeuvres on behalf of Ben-David were harshly condemned by Abu Khdeir's family, who expressed doubt they would get justice.
Last Update: Feb 23, 2016 5:16 pm
RELATED TOPICS