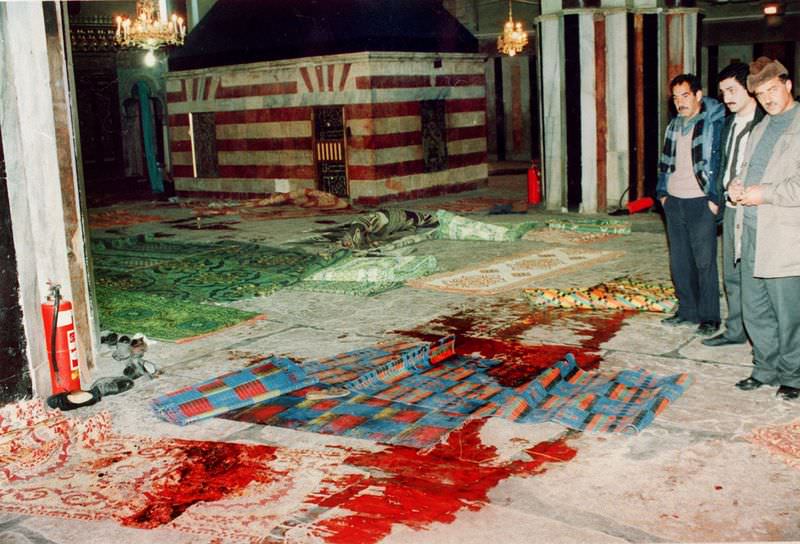 The event later became known as the Ibrahimi Mosque massacre. The horrific events took place on the last Friday of Ramadan on Feb. 25, 1994.

Seven hundred people gathered to observe the communal dawn prayer. Moments after the prayer started, Goldstein entered the mosque and opened fire. He was eventually overpowered and beaten to death by the courageous worshippers.

Many survivors believe that the Israeli army assisted Goldstein in this horrendous crime.

Israeli forces broke up an altercation between Israeli settlers and local Arab residents shortly after the communal prayers were conducted the evening prior to the massacre.

Coincidently, no Arabs were arrested.

Momen Wazwaz, a survivor of both the preceding altercation and the ensuing massacre recalls the that Israeli police publically threatened the Arab residents while breaking-up the altercation by announcing, "Wait and see what will happen to you tomorrow."

According to Wazwaz, now 45, only three Israeli soldiers were guarding the mosque on the day of the massacre, as opposed to the usual 10.

"No women were allowed to enter the mosque that day. However, around seven hundred men gathered inside to pray," Wazwaz said.

Moments after they started praying, gunfire rang out.

"I turned around and saw dozens of worshipers lying dead on the ground, while the shooter [Goldstein] was laughing and reloading his weapon," he added.

Goldstien was armed with 300 rounds of ammunition and five grenades. Fortunately, worshipers succeeded in disarming him before he was able to reload and continue shooting.

Adel Idris, who was leading the prayer on that fateful morning, reported that the gunfire hit them from behind. Everyone was defenseless.

"I didn't realize what was happening. I tried to stand up but someone pulled me down," Idris said. "While we lay huddled on the floor with our lives in the balance, he looked at me and said that it was live ammunition."

But not all of his family was saved.

"I lost my 11-year-old brother, who was shot three times. I'll never forget that terrible day," Idris said. "Dead bodies were scattered all over. Blood was everywhere."

Those who tried to escape found that the doors were locked by the Israeli guards.

Revered by Jews, Christians and Muslims, the mosque marks the burial sites of prophets Abraham, Isaac and Jacob. It is referred to as the Tomb of the Patriarchs by Jews.

Violent Clashes broke out immediately following the massacre. Within hours, 50 Palestinians were killed and 350 Israeli soldiers were injured.

Rather, Goldstein was said to have acted independently, and the Israeli political leadership could not have predicted his actions.

The commission-which had the mosque closed during the inquiry-proposed that the mosque be divided between Jews and Muslims, with Jews being allocated over 50 percent.

Shortly thereafter, Israeli authorities arbitrary closed down al-Shuhada Street. Located in the old city of Hebron, the street was home to over 3,000 Palestinian-owned business, all of which were closed as a result. The economic heart of Hebron's once bustling downtown was effectively killed.

Locals believe that these punitive measures taken by the Israeli government serve to advance their apartheid policy.

In 1997, an agreement known as the "Hebron Protocol" split the city in two.

Palestinians retained 80 percent of the old city, which is known as Area H1. The remaining 20 percent is known as area H2 and is under the control of the Israeli military.

This area includes parts of the mosque, effectively splitting it between Jews and Muslims as was initially requested by the Shamagar Commision.