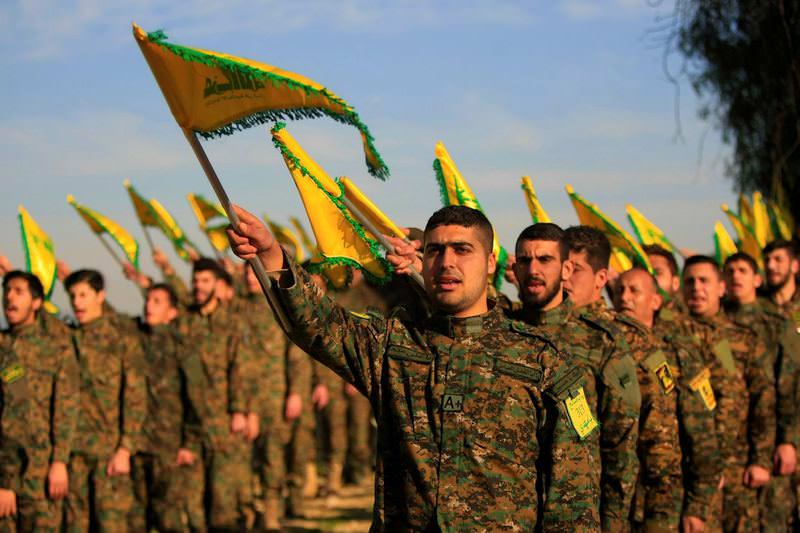 Hezbollah fighters who are considered terrorist by the members of the Gulf Cooperation Council hold flags in a march.
by Daily Sabah with Wires Mar 04, 2016 12:00 am

Iran said the Gulf Cooperation Council made a mistake labelling Hezbollah a terrorist organization and that the move may jeopardize peace, while the interior ministers of several Arab countries accused Hezbollah of deepening sectarian rifts and recruiting young Arabs

Iran accused Gulf Arab neighbors on Thursday of jeopardizing Lebanon's stability by blacklisting the Iranian-backed Hezbollah group, state television said, a move likely to stoke tensions in the regional power rivalry between Tehran and Riyadh. The six-member Gulf Cooperation Council (GCC) branded Hezbollah a terrorist organization on Wednesday, opening up the possibility of further sanctions against the group that wields influence in Lebanon and fights in Syria. Leading Sunni Muslim power Saudi Arabia and Shiite Muslim Iran compete for influence across the region and back different factions in sectarian-riven Lebanon and in Syria's civil war. "Lebanon's Hezbollah is the vanguard of resistance against the Zionist regime (Israel) and Iran is proud of the group, which is also the champion of the fight against terrorism in the Middle East," Iranian state TV quoted Deputy Foreign Minister Hossein Amir Abdollahian as saying. "Calling Hezbollah a terrorist group ... will harm the unity and security of Lebanon" and would undermine peace in the region. In meantime, interior ministers of several Arab countries condemned and deplored "the practices and dangerous acts by the terrorist group Hezbollah to destabilize security and peace in some Arab countries," on Wednesday.

Hezbollah's leader said on Tuesday Lebanon had been pushed into a new phase of political conflict by Saudi Arabia but was not on the brink of civil war and its government of national unity, of which Hezbollah is a part, should survive.

In 2013, the Sunni-dominated GCC, representing Saudi Arabia, United Arab Emirates, Bahrain, Kuwait, Oman and Qatar, imposed sanctions on Shiite Hezbollah after it entered Syria's war in support of Bashar Assad. The GCC did not specify on Wednesday what action might be taken against Hezbollah. But last week Saudi Arabia, the biggest power in the GCC, said it had blacklisted four companies and three Lebanese men for having links to the group. Relations between Lebanon and Saudi Arabia have been plunged into crisis since Riyadh halted $3 billion in aid to the Lebanese army, a response to the Beirut government's failure to condemn attacks on Saudi diplomatic missions in Iran. In January, Riyadh led several Arab countries in cutting diplomatic ties with Tehran after demonstrators burned its embassy and a consulate in protest against the execution of a prominent, dissident Shiite cleric by Riyadh.

Saudi Arabia, Bahrain and the United Arab Emirates last week urged their citizens not to travel to Lebanon, days after Riyadh cut $4 billion in aid to Lebanese security forces. The Saudi Foreign Ministry's announcement, carried by the state-run Saudi Press Agency, urged citizens already there to depart or to be in contact with the Saudi Embassy in Beirut. It gave no reason for the warning other than unspecified safety concerns. The United Arab Emirates followed by saying it would pull most of its diplomats out of Lebanon and warned its own citizens not to travel there, according to a statement carried by the state-run WAM news agency. It did not elaborate or offer a reason for the decision. Bahrain issued its own statement late Tuesday, telling citizens of the tiny island kingdom of Saudi Arabia to avoid travel to Lebanon, while telling citizens already there "to promptly leave and to exercise extreme caution at all times." It offered no reason for the order. Finally Qatar and Kuwait urged their citizens not travel to Lebanon and leave the country if they are already there. In Lebanon's tangled political scene, Saudi Arabia and its Gulf allies are staunchly opposed to Hezbollah, a political party in the governing coalition that also has a powerful militia backed by Iran, Riyadh's arch regional rival. Hezbollah fighters are playing a crucial role fighting alongside Syria's Bashar Assad's forces in the Syrian civil war. Saudi Arabia and the other Sunni Gulf Arab states are opposed to Assad. Relations between Shiite Iran and Saudi Arabia hit a new low last month when Saudi authorities executed Saudi Shiite cleric Nimr al-Nimr, along with three other Shiites and 43 members of al-Qaida, on terrorism charges. Iranian protesters attacked Saudi diplomatic missions in the country, leading the kingdom to cut off ties.
RELATED TOPICS