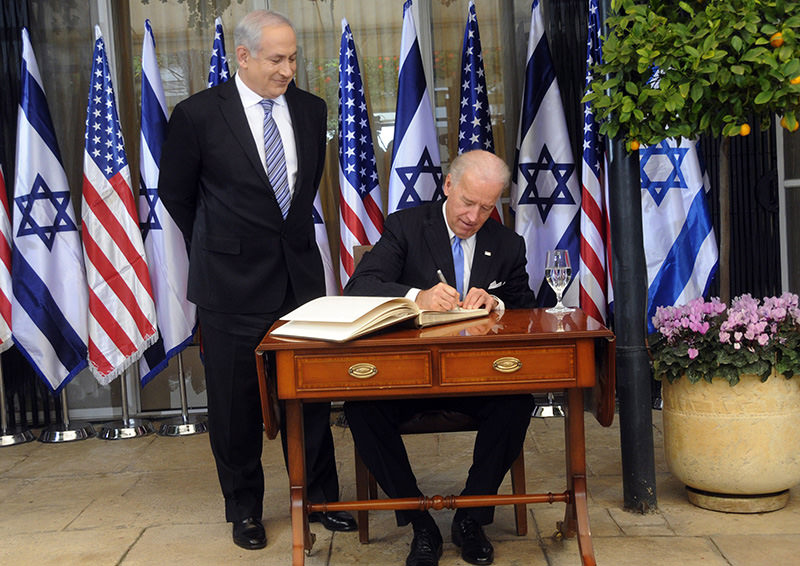 Israeli Prime Minister Benjamin Netanyahu (L) watches US Vice President Joe Biden signing the guestbook at his residence in Jerusalem, 09 March 2010 (EPA Photo)
by Daily Sabah with Agencies Mar 08, 2016 12:00 am
Benjamin Netanyahu's office said Tuesday that the Israeli prime minister will likely not accept a White House invitation for later this month, as US Vice President Joe Biden landed in Tel Aviv for his first official visit in years.

Biden was given an official welcome at Ben-Gurion International Airport, ahead of Wednesday talks with Netanyahu in Jerusalem and Palestinian President Mahmoud Abbas in the nearby West Bank city of Ramallah.

The vice president was last in Israel for late prime minister Ariel Sharon's funeral in early 2014.

His last official talks in Jerusalem and Ramallah in early 2010 were overshadowed by an announcement of a controversial construction project in an ultra-Orthodox Jewish settlement in East Jerusalem.

Tuesday's arrival was marred by three attempted knife and gun attacks in Jerusalem and east of Tel Aviv, in which three Palestinian assailants were shot dead and three Israelis injured. Biden's visit comes after over five months of ongoing street violence in Israel and the Palestinian areas, and after the last attempt at US-led peace talks collapsed almost two years ago.

Israel's ambassador to Washington, Ron Dermer, said in a meeting in the White House on Friday that Netanyahu would most likely not travel to the US this month, the prime minister's office said in a statement on its Facebook page Tuesday.

Dermer expressed "appreciation for President Obama's willingness to meet with" Netanyahu, but said there was a "big chance" that the Israeli leader would not come to Washington.

A final answer would be given next week, it said.

According to a spokesman for the White House National Security Council, a meeting between Netanyahu and Obama was proposed two weeks ago and supposed to take place on March 18 two days before a conference in Washington of the US pro-Israel lobby.

Israel's biggest-selling daily, Yediot Ahronot, quoted sources close to Netanyahu as saying that the premier was not keen on going for two reasons.

With the US election season at its peak, Netanyahu did not want to be drawn into it, but felt he could not refuse to meet with some of the candidates should they request a meeting with him, they said.

Netanyahu also wanted to put off signing a deal on a military aide package with Obama, because he preferred to "do business" with the next president, they added.

Relations between Obama and Netanyahu have been tense over the years.

The premier "is looking forward" to Biden's visit and is eager to "discuss with him the great challenges facing the region," said Tuesday's statement from prime minister's office.

The relations between Israel and the U.S. are in an unprecedented era as it has become visible that the two countries are disappointed with each other's some policies. "Relations with Israel have not always been excellent, but I think any observer would argue they've never been worse," said the Republican Arizona Senator John McCain on February 1, 2015 on CNN's "State of the Union." The harsh criticism by McCain has come after the White house announced that neither the Obama nor the Secretary of the State, John Kerry, will meet Netanyahu during his visit. Netanyahu accepted the invitation by the U.S. House Speaker, John Boehner, to address a joint meeting of the House and Senate with a speech in March 2015, two weeks before the Israeli elections which were on March 17. However, neither Boehner nor Netanyahu consulted the White House about Boehner's invitation to the Congress.

Netanyahu holds a hardliner position regarding the nuclear talks with Iran, whereas the Obama administration seeks diplomatic solutions. Furthermore, the U.S. administration continuously voices concerns over the construction of new settlements by the Israeli government in the occupied territories and invites Israel to engage in a two-state solution to the conflict between Israel and Palestine, though this seems unlikely given the recent formation of, perhaps, one of the most right-wing coalition governments in Israel's history.

The rising tensions between the two historically allies' leaders, which have surfaced recently, have resulted from a serious of diplomatic confrontations which has contributed to the souring of the relations. In addition, it is no secret that Netanyahu and Obama have not been the closest friends, as one would expect from the leaders of the states that are such strong allies.
Last Update: Mar 08, 2016 7:04 pm
RELATED TOPICS