Tunisia, Pakistan hit by blast, clashes, children among the dead 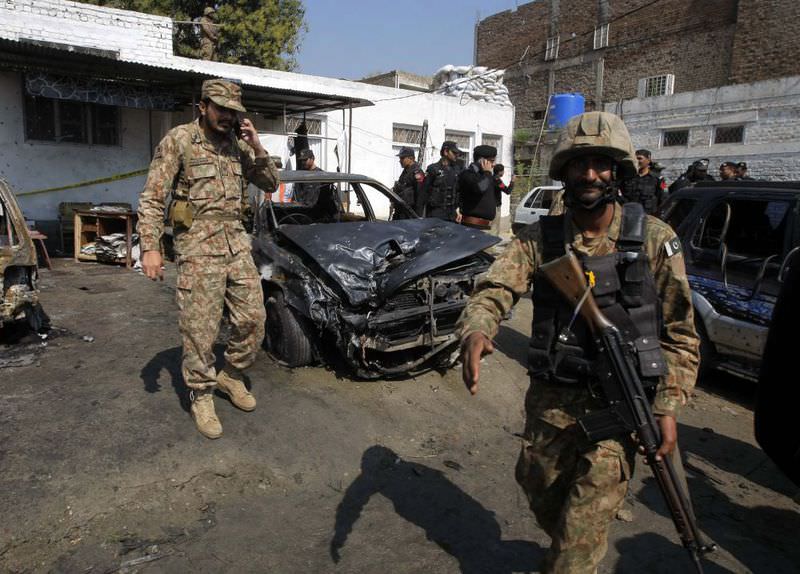 Pakistani soldiers inspect the site of a suicide bombing in Shabqadar on March 7.
by Compiled from Wire Services Mar 08, 2016 12:00 am

A suicide attack killed 13 in Pakistan and clashes left at least 45 dead, including the attackers, in Tunisia on Monday. In both countries, children have been reported among the dead

A suicide bomber killed 13 people and injured 23 in northwest Pakistan on Monday, in an attack that the Taliban described as revenge for the hanging of Mumtaz Qadri last week.

The bomber, whom police said was aged around 20 and had up to 6 kilograms of explosives strapped to his chest, attacked as lawyers and litigants were arriving at a court complex during the morning rush hour in the town of Shabqadar. Senior police official Fayaz Khan said 13 people were killed and 23 wounded after the bomber blew himself up inside the complex, with the toll confirmed by a local administration official.

The Pakistani Taliban's Jamat-ul-Ahrar faction claimed responsibility for the attack, saying it avenged the hanging of Mumtaz Qadri - feted as a hero by supporters after he gunned down the liberal governor of Punjab in 2011 over a call to reform the country's blasphemy law.

Qadri was hanged on Feb. 29 in what analysts described as a key moment in Pakistan's long fight against militancy, saying it demonstrated the government's resolve to uphold the rule of law rather than allow extremism to flourish. His funeral brought up to 100,000 people on to the streets, hailing him as a hero.

Authorities said two children and two policemen were among the dead. Senior regional police official Saeed Wazir praised the bravery of officers who "sacrificed their lives." There were around 300 people in the complex at the time, another police official said.

Local bar association president Shair Qadir said they had requested security after receiving threats of an attack, but no action was taken in what he termed a police failure. Shabqadar is near the Mohmand tribal district, one of seven semi-autonomous regions bordering Afghanistan where militants from al-Qaida and the Taliban had established bases in the past. Islamabad launched a military offensive in the tribal areas in 2014 that has reportedly killed thousands of militants and pushed the rest over the border to Afghanistan, resulting in improved security inside Pakistan. However, insurgents associated with the Pakistani Taliban occasionally carry out attacks from bases inside Afghanistan.

Meanwhile, Tunisia was also hit by clashes as Tunisian police and unidentified gunmen clashed near the Libyan border yesterday, killing at least 45 people, authorities said, amid increasing concern that violent extremism in Libya could destabilize the region.

The dead included 21 attackers, one Tunisian soldier and four civilians, the interior and defense ministries said in a joint statement. A 12-year-old girl was among the fatalities.

The gunmen targeted a police station and military facilities at dawn in the border town of Ben Guerdane in eastern Tunisia, Interior Ministry spokesman Yasser Mosbah told The Associated Press earlier. France's foreign ministry condemned the attacks and identified the gunmen as "terrorists coming from Libyan territory." "This attack is just reinforcing the urgent need for a political solution in Libya," the ministry said in a statement, adding that the country was targeted because of its "exemplary democratic transition."

Hospital official Abdelkrim Sakroud said on state radio that three corpses had been brought in, including that of the 12-year-old girl. The Tunisian military sent reinforcements and helicopters to the area around Ben Guerdane and authorities were hunting several attackers still at large. The ministry urged residents to stay indoors.

The violence comes amid increasing international concern about DAESH extremists in Libya. Tunisia's fledgling democratic government is especially worried after dozens of tourists were killed in extremist attacks in Tunisia last year.

Last week, Tunisian security forces killed five heavily-armed men in an hours-long firefight after they crossed into the country from Libya with a larger group. Tunisian security forces had been placed on alert based on "precise information" of possible border infiltrations following the Feb. 19 U.S. raid on a DAESH camp near the Libyan town of Sabratha, not far from the Tunisian border, the statement said. Defense Minister Farhat Horchani said last week that German and American security experts were expected in Tunis on Monday to help Tunisia devise a new electronic video-surveillance system of its border with Libya.

Tunisia was targeted last year by three attacks that left 70 people dead and were claimed by DAESH. According to Tunisian authorities, the attackers had been trained in Libya.
RELATED TOPICS