Saudi-led coalition: Major fighting in Yemen coming to an end 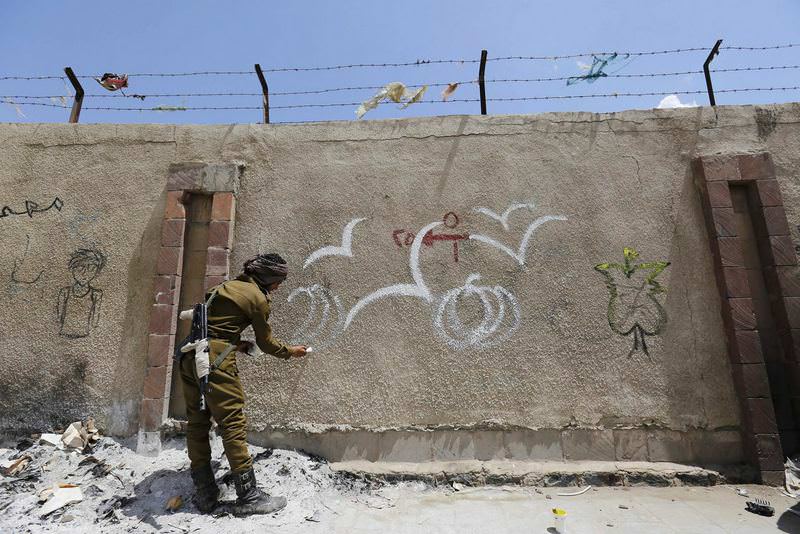 An armed Yemeni soldier paints graffiti in support of peace in the war-affected country on a wall in Sanaa. (EPA Photo)
by Daily Sabah with Wires Mar 19, 2016 12:00 am

Amid growing concerns over the humanitarian abuses and mass civilian deaths in Yemen, Ahmed al-Asseri, the spokesman of the Saudi-led coalition, said major fighting will end soon and a restoration phase will start

The spokesman for the Saudi-led coalition battling the Iran-allied Houthis in Yemen has been quoted as saying major fighting in the country is drawing towards a close, one year after the military campaign began. Fighting on two of the main battlefronts in Yemen, along the border with Saudi Arabia and in the city of Taiz, has calmed this month following mediation by local tribes and there have been secret talks in Saudi Arabia towards finding a resolution. Saudi TV channel al-Arabiya quoted the spokesman, Brigadier General Ahmed al-Asseri, as saying on Thursday that "the major fighting in Yemen is nearing an end ... (and) the next phase is a stage of restoring stability and reconstructing the country". Arabiya gave no further details and Asseri could not be immediately reached for comment.

The Saudi-led coalition began its military campaign a year ago with the aim of preventing the Houthi group and forces loyal to Yemen's ex-president Ali Abdullah Saleh from taking control of the country. It also aims to restore President Abd-Rabbu Mansour Hadi to power in the capital Sanaa.

Asseri and Saudi Foreign Minister Adel al-Jubeir have in recent days said that any peace talks can only take place between Hadi and the Houthis, and through the U.N. special envoy Ismail Ould Cheikh Ahmed. Asseri announced last April that the coalition's initial operation had ended, saying it had "neutralised most of the military capabilities of the Houthi militias and their allies that represented a threat to Yemen and neighboring countries." However, the fighting then intensified as the coalition added small numbers of ground troops to support Yemeni fighters, backed by an increasingly heavy air campaign. The coalition retook Yemen's second city, Aden, from the Houthis and Saleh's forces in July, the northeastern town of Marib in September and the small northwestern port of Midi this year. Bitter fighting in Taiz since the autumn calmed somewhat this month and a Houthi siege of the city ended. Near-daily attacks on Saudi border positions have gone on for months, killing hundreds of the kingdom's soldiers and civilian residents of frontier regions.

Meanwhile, the civilians suffer from the war and coalition attacks. The senior U.N. human rights official on Friday condemned the Saudi-led coalition's air strike that killed more than 100 people at a Yemen market this week, saying it was "responsible for twice as many civilian casualties as all other forces put together." "These awful incidents continue to occur with unacceptable regularity. In addition, despite public promises to investigate such incidents, we have yet to see progress in any such investigations," Zeid said in a statement. "We are possibly looking at the commission of international crimes by members of the Coalition," Zeid said. His staff who visited the site of Tuesday's deadly strike and interviewed witnesses "found no evidence of any armed confrontation or significant military objects in the area at the time of the attack."

While the Saudi Arabia-led coalition attempts to break Houthi power across the country through bombing military strongholds and Houthis respond with attempts to expand the territories under their control, both Sunni and Shiite civilians suffer from the conflict. More than 6,000 Yemenis, about half of them civilians, have been killed in the fighting and airstrikes over the past year, the United Nations says. Millions more have been displaced. Yemen's slide into civil war has made the country a crucial front in mostly Sunni Saudi Arabia's rivalry with Shiite Iran, which Riyadh accuses of stirring up sectarian strife through its support for the Houthis. The advance of the Iranian-allied Houthi group raises fears of the possible disintegration of the country. Sanaa has been under Houthi rebel control since September of last year. The country has been facing severe political instability after the takeover of the presidential palace by Houthi militants prompted Hadi to tender his resignation. Hadi fled to the southern port city of Aden where he has re-established his presidency. As the country continues to be dragged into civil war, the U.N. has started to hold mediated peace talks between Houthis and Hadi's government in a bid to bring peace and stability back to the country.

Yemen is also of crucial importance for the U.S., as the country is home to one of their worst enemies, al-Qaida's deadliest franchise, al-Qaida in the Arabian Peninsula (AQAP), which has orchestrated numerous high-profile terrorist attacks, including claiming responsibility for the Jan. 7 Charlie Hebdo massacre in Paris. Since 2002, the U.S. has been conducting counter-terror strikes and operations against radical militants as part of U.S. national security policy. During U.S. President Barack Obama's time in office, there have been 15 airstrikes and 107 drone strikes in Yemen as part of a "targeted killing policy." The practices of the Obama administration raise serious laws of war concerns regarding the human cost of U.S. security policy in Yemen.