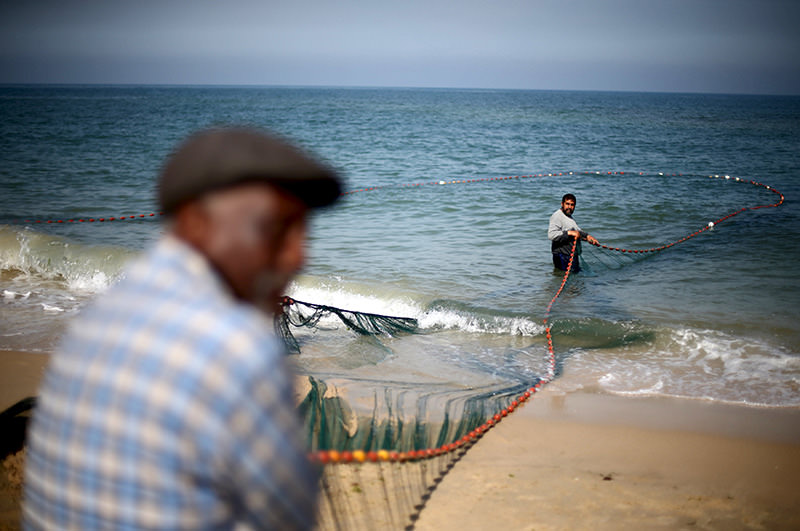 As Israeli authorities took an important step on Sunday by easing fishing zone restrictions, a vital source for the economy in the blockaded Gaza Strip, they formally halted all cement deliveries required for some 1.8 million Palestinians stuck in the narrow piece of land to improve their building conditions.

COGAT, the Israeli defense body that handles civilian issues with the Palestinians, announced the new easing of restrictions on its Arabic Facebook page. About 60 boats raced to the new zone after police blew a whistle Sunday afternoon.

To prevent squabbling over fishing rights, Gaza's ruling Hamas group ordered that whoever reaches a new spot first can claim fishing rights in the area.

The new maritime perimeter expands the fishing zone off parts of Gaza by three more nautical miles to nine.

Again on Sunday, Raed Fattouh, the head of the Palestinian Commission to Coordinate the Entry of Goods into the Gaza Strip, said the Israeli authorities had "officially and completely" halted all cement consignments to Gaza's private sector.

"Israeli authorities informed us of their decision to stop all cement deliveries to Gaza as of Sunday, without providing any reason for the move," Fattouh said.

He went on to note, however, that the decision did not apply to limited quantities of cement supplied to projects being carried out in Gaza by the United Nations Relief and Works Agency for Palestine Refugees in the Near East (UNRWA).

Israeli authorities, for their part, have yet to officially comment on Fattouh's assertions.

Israeli media, however, has recently quoted Israeli officials as saying that Hamas -- the Palestinian resistance group that has governed the Gaza Strip since 2007 -- was routinely appropriating imported cement for its own purposes.

Gaza's Hamas-run Economy Ministry, meanwhile, denounced the decision, warning of the move's likely repercussions on the reconstruction of the war-battered strip, which is still recovering from a devastating 2014 Israeli military onslaught.

The ministry added that the amounts of cement currently entering Gaza via the Kerem Shalom border crossing – which links Egypt, Israel and the Gaza Strip – had failed to meet the minimum requirements of the strip's roughly 1.9 million inhabitants.

The ministry went on to note that it had appealed to the UN and other international institutions to pressure Israel to reverse its decision.

Israel imposed restrictions on the movement of goods and fishing rights since Hamas assumed governance of the strip in 2007, after Hamas gained control in Gaza from forces loyal to Western-backed Palestinian President Mahmoud Abbas in bloody street battles, which followed a political spat after elections in 2006 won by Hamas and Fatah led by Abbas refusing to give away power.

Under the terms of a cease-fire agreement that ended the 2014 conflict, all building materials that enter the strip must only be used to rebuild civilian infrastructure.

In July and August of 2014, Israel waged a 51-day onslaught against the Hamas-run enclave with the stated aim of staunching rocket-fire from Gaza.

During the conflict, more than 2,150 Palestinians in Gaza were killed – the vast majority of them civilians – and broad swathes of infrastructure destroyed.