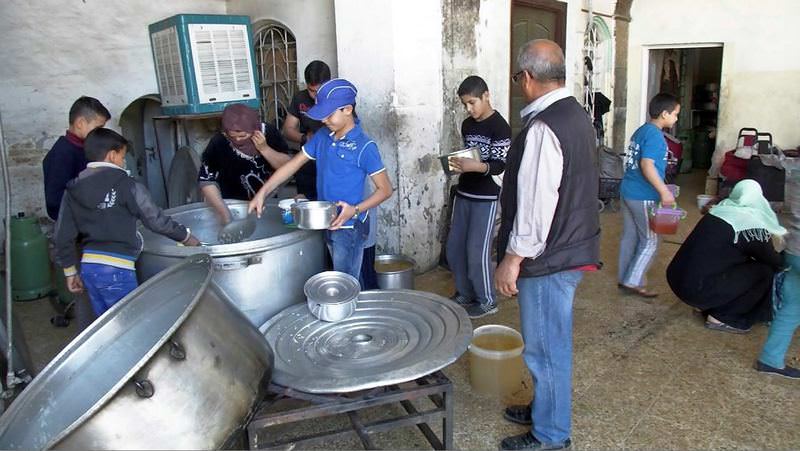 by Associated Press Apr 07, 2016 12:00 am
They line up daily by the dozens in the breezy courtyard of a mosque just outside the Iraqi city of Irbil's main bazaar displaced people from across Iraq, hoping for a hot meal. Volunteers at the Shrine of Sheikh Chouli in the Kurdish regional capital boil chicken and rice in metal pans the size of truck wheels and spoon them into buckets and bowls. All are served, including internal refugees from elsewhere in Iraq, Bangladeshi street cleaners and even some local residents who believe the food is blessed. But the displaced have swelled their ranks. Before DAESH swept across northern and western Iraq in 2014, around 100 people would line up for food each morning. Since then the number has tripled.

With U.N. agencies and other aid groups struggling to cope with the worst refugee crisis since World War II, many of the displaced have come to rely on local charities like this one, which has been aiding the poor since the time of Sheikh Mohammed Othman al-Naqshabandi, a 19th century Sufi saint entombed here, who is popularly known as Sheikh Chouli. Abdul-Jabar Mohammed, a 50-year-old with asthma who fled from the city of Falluja, several hundred miles to the south, walks three miles every day from the house his family rents on the outskirts of Irbil to the shrine. "This is a blessed mosque. Very good people work here and they are distributing food for the sake of God to the displaced people as well as the other poor people," he said, adding that the food is quite tasty. "There are other organizations distributing food too, but this is our main source of food," he added. "We are totally dependent on this mosque." Jamila Ali Mohammed, who fled from heavy fighting in a town south of Baghdad, has been coming here for two years. "Whatever they can, they give it to us," said Mohammed, who is sharing a cramped hotel room with her family of seven. "These clothes are also from the mosque. Everything comes from the mosque. I have nothing."

The mosque largely relies on donations from the merchants in the nearby bazaar, who give money, food and clothes. The volunteers cook up 150 kilograms of rice and 35 kilograms of meat every day, according to Muatassam Dhia Nader, who supervises the distribution. "We distribute (everything) without any discrimination. Arabs, Kurds, Turkmen all are the same, even Christians come here," Nader said. The numbers could grow larger still. Iraqi forces backed by U.S.-led airstrikes have advanced on a number of fronts in recent months, but the war against DAESH militants is far from over. "What we are doing here is based on our capability, and it's based mainly on donations," said Emadeddin Faiz Abdullah, the shrine's imam. "Whatever we have, we will distribute to people. When we run out, we can't do anything about it."
Last Update: Apr 07, 2016 1:06 am
RELATED TOPICS