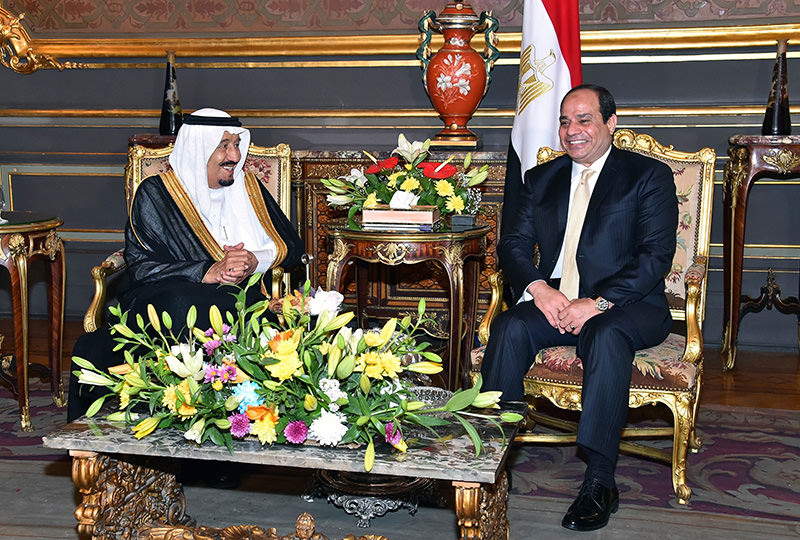 During Saudi King Salman’s visit to Egypt, Saudi Arabia and Egypt signed agreements to specify maritime borders, allowing both countries to benefit from maritime zones that were previously untapped

Egyptian President Abdel Fattah al-Sissi and Saudi King Salman agreed to set up a $16-billion investment fund Saturday and settled a long-standing maritime dispute as the monarch continued his rare visit to the country.

A day after Salman announced a plan to build a bridge over the Red Sea to Egypt, the heads of state met at the historic Abdeen Palace in Cairo to oversee the inking of a string of agreements Egypt hopes will help boost its battered economy. The 80-year-old Saudi monarch's visit to Egypt has been seen as a clear show of support for Sissi, the former military chief who toppled his democratically elected predecessor Mohamed Morsi in 2013.

In one of the most high-profile announcements, Saudi Arabia and Egypt have signed agreements to specify maritime borders, a cabinet statement said on Saturday, allowing both countries to benefit from maritime zones that were previously untapped. The technical drawing of the border include the Tiran and Sanafir islands as part of Saudi Arabia's territory, the statement said.

In 1950, Saudi Arabia's founder King Abdulaziz Al Saud had requested Egypt to protect those islands which has been the case since then. The islands bear strategic importance as they are located on the straits that connect the Red Sea with the Gulf of Aqaba, where Jordan's only sea port of Aqaba and Israel's only Red Sea port of Eliat are located.

In May 1967, Nasser's Egypt's closure of the straits for vessels bound to Israel set one of the main excuses for the Six Day War, in which Israel launched pre-emptive air and ground strikes against Egypt and Jordan. During the war, Israeli troops occupied the whole Sinai Peninsula located on the west of the straits up to the Suez Channel, holding it until 1982. The Gaza Strip was also captured from the Egyptians, whereas the West Bank was captured from Jordan and Golan Heights was captured from Syria. Israeli occupation in all three areas continues to this day.

Drawing up the maritime border for both countries had been in progress for over six years. "This enables both countries to benefit from the exclusive economic zone for each, with whatever resources and treasures they contain," the statement said.

But the agreement announced by the cabinet on Saturday to settle the dispute over the islands of Tiran and Sanafir provoked an immediate backlash in Egypt, where thousands tweeted a hashtag accusing Sissi of selling the islands.

Since touching down on Thursday, Salman and his delegation have announced a slew of investments in Egypt. A live Egyptian state television broadcast on Saturday showed an official announcing the latest agreements, signed by a representative of each country. The two nations agreed "to set up a Saudi-Egyptian investment fund with a capital of 60 billion Saudi riyals ($16 billion)," the announcer said, giving no further details.

More than a dozen other accords, including a memorandum of understanding to set up an industrial zone in Egypt, were also announced.

Saudi Arabia has been a key backer of Sissi since the overthrow of Morsi, whose Muslim Brotherhood movement was viewed by Riyadh with suspicion. It has since pumped billions of dollars in aid and investment into Egypt. Egyptian officials and media have heaped accolades on Salman, with state television welcoming him to what it called his "second country" -- a country Riyadh views as a cornerstone in its ambitions to be a regional leader against Iran.

Earlier on Saturday, Salman paid a visit to the prestigious Al-Azhar mosque. He is due to address parliament on Sunday and receive an honorary doctorate from Cairo University on Monday.

An Egyptian government official had said the deals agreed with Saudi Arabia, excluding the investment fund, would amount to $1.7 billion.

On Friday, both leaders lavished praise on each other's countries and their relationship. "This visit comes as a confirmation of the pledges of brotherhood and solidarity before the two brotherly countries," Sissi said in a televised speech.

The visit follows months of reports in Saudi and Egyptian newspapers of strained ties over Cairo's unwillingness to participate fully in Saudi-led military operations against Iran-backed Shiite rebels in Yemen.

Egypt had announced it would back Saudi Arabia with ground troops if needed, but appears to have balked at the prospect of becoming mired in the conflict.

However, Saudi Arabia has played a key role in propping up Egypt's economy, whose vital tourism industry has been devastated by years of political turmoil and terrorist attacks.

For Saudi Arabia, which is in competition with regional rival Iran, keeping Egypt under its aegis is crucial.