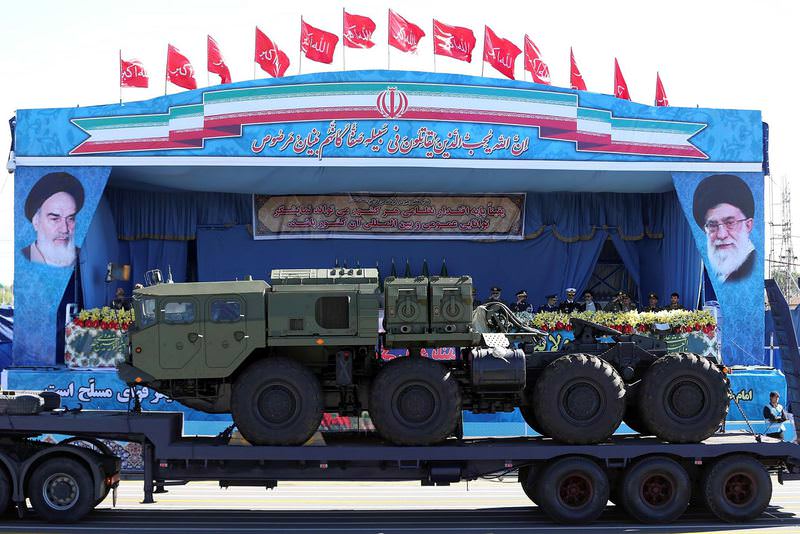 by Daily Sabah with Reuters Apr 18, 2016 12:00 am
Iran showed off parts of its new Russian S-300 missile defense system during National Army Day on Sunday, where President Hassan Rouhani said the country's armed forces were no threat to neighboring countries. Every year, Iran's armed forces hold parades across the country to mark Army Day. In a ceremony in Tehran, broadcast live on state television, trucks carrying the missiles drove past a podium where Rouhani and military commanders were standing. Soldiers also marched passed the podium and fighter jets and bombers took part in an air display.

"The power of our armed forces is not aimed at any of our neighbors ... Its purpose is to defend Islamic Iran and act as an active deterrent," Rouhani was quoted as saying by the state news agency IRNA, in a speech at the Army Day ceremony. Russia delivered the first part of the S-300 missile defense system to Iran last week, one of the most advanced systems of its kind that can engage multiple aircraft and ballistic missiles around 150 km (90 miles) away. Rouhani said on Sunday that during the nuclear talks Iranian negotiators also aimed to maintain and boost the country's military capabilities. Russia's agreement to provide Iran with S-300 has sparked concern in Israel, whose government Iran has said it aims to destroy. The U.S. has also voiced its concern over the sale.

Iran and Russia, long-time allies of Syria, have also reinforced their military and nuclear cooperation since the signing in July of an historic accord between Tehran and the world powers on the Iranian nuclear program. Russia has authorized the delivery of S-300 anti-aircraft batteries to Iran, despite the strong opposition of the Western powers. Russia will also sign this year a contract with Iran to supply a batch of its Sukhoi Su-30SM multi-role fighter jets to the Islamic Republic, RIA news agency on Wednesday quoted a senior official at Russia's arms export agency as saying. "According to reports, Iran is seeking to buy Russian Su-30 and Yak-130 jets; the Mi-8 and the Mil Mi-17 helicopters; the K-300P Bastion-P Russian mobile coastal defense missile system equipped with Yakhont anti-ship missiles, in addition to diesel-electric submarines and other military equipment. There are also reports that Iran is interested in purchasing T-90 tanks. Tehran, could also seek Russian expertise in repairing Iran's fleet of the Mikoyan MiG-29s, Sukhoi Su-24MKs and submarines," Russia Today reported on February. On November 23, Moscow lifted a ban on the sale and delivery of technological materiel tied to the nuclear industry after a meeting between Russian President Vladimir Putin and Hassan Rouhani.
RELATED TOPICS