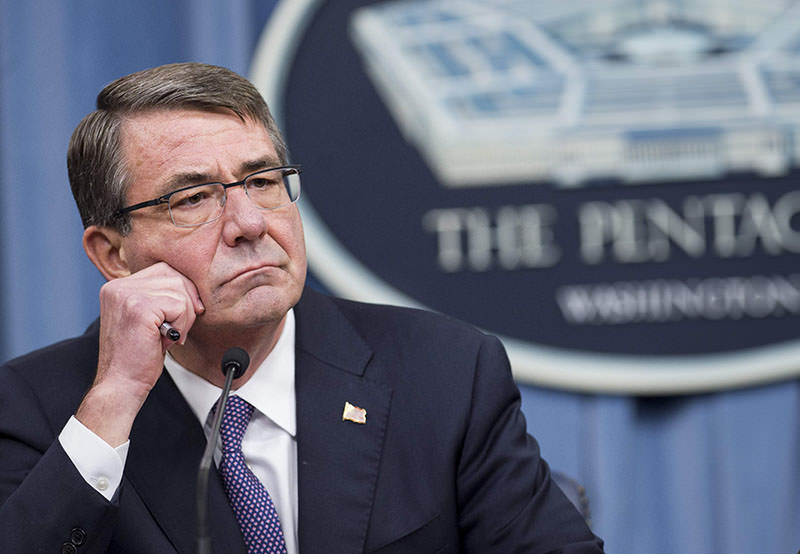 US Secretary of Defense Ashton Carter listens during a press briefing at the Pentagon in Washington, DC, March 25, 2016 (AFP)
by Compiled from Wire Services Apr 18, 2016 12:00 am

U.S. Secretary of Defense Ashton Carter made an unannounced visit to Baghdad on Monday for talks with Iraqi officials on the war against the Daesh terrorist group, while U.S. officials announced the deployment of additional troops advise Iraqi forces closer to the front lines.

U.S. officials said that the U.S. will send 200 more troops and a number of Apache helicopters to assist Iraqi troops.

The announcement comes during a push to retake the key city of Mosul, Iraq's second-largest. The decision reflect weeks of discussions with commanders and Iraqi leaders, and a decision by President Barack Obama to increase the authorized troop level in Iraq by 217 — or from 3,870 to 4,087.

Most of the additional troops would probably be Army special forces, who have been used to advise and assist the Iraqis. The remainder would include some trainers, security forces for the advisers, and more maintenance teams for the Apaches.

The advise-and-assist teams — made up of about a dozen troops each — would embed with Iraqi brigades and battalions, putting them closer to the fight, and at greater risk from mortars and rocket fire. They would have security forces with them.

The US is leading an international coalition that is carrying out strikes against Daesh and also providing training and other assistance to forces fighting the terrorists in both Iraq and neighboring Syria.

"The fight for Mosul is critical... and it's a very large urban scenario," a senior defense official said.

"We are going to need to be more aggressive," the official said.

Daesh overran large areas north and west of Baghdad in 2014, but Iraqi forces have since regained significant ground from the group.

Iraqi forces have begun preparatory operations in Nineveh province, of which Mosul is the capital, but the actual assault to take the city is not expected to take place for months, and possibly not until next year.

The US has deployed some 3,900 troops to Iraq, most of them in advisory and support roles.

But Washington has also sent special forces to carry out raids against Daesh, and US Marines have deployed to provide artillery support to Iraqi troops.