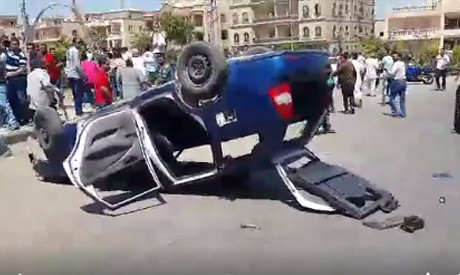 Riots erupted in Cairo after an Egyptian policeman shot three people, killing one of them, a Cairo street vendor on Tuesday following an argument over the cost of a cup of tea, the interior ministry and witnesses confirmed.

The Interior Ministry said in a statement that a policeman got into an argument with a vendor over "the price of a drink" and shot him dead, injuring two others in the process.

"This because of a cup of tea that costs one pound!" He was shot in the back and the chest. I swear to God this is oppression!" one of the witnesses at the scene shouted while standing over the body of the victim in a video from the scene.

A crowd quickly gathered, overturning a police vehicle and beating up another policeman at the scene, said a witness, who did not see the shooting but said he arrived at the scene in the well-to-do neighborhood of Rehab shortly afterwards.

"The Interior Ministry are thugs," chanted the crowd in a video sent to Reuters by the witness. Around 200 people were in the crowd, according to a Reuters estimate from the footage.

"There are clashes between the police and locals. Security forces brought in two riot police vehicles and an armoured truck and the victim's family is here and pelting them with rocks," said the witness who sent the video and who declined to be named for fear of reprisal.

Egypt's police have been on the defensive after rights groups denounced alleged torture and deaths in detention, as well as arbitrary arrests and the disappearances of government opponents.

The alleged abuses are reminiscent for many Egyptians of those perpetrated by police under the rule of longtime president Hosni Mubarak, who was toppled in 2011 partly as a result of public outrage to impunity for security services.

A court this month sentenced a policeman to life in prison for shooting dead a taxi driver over a fare dispute.

President Abdel Fattah al-Sisi had said he would ask parliament to amend the law to toughen sanctions for police abuses after the February killing.

Thousands of doctors held a protest earlier this year against the police after officers allegedly assaulted two doctors in a hospital.

And several policeman have been detained for violence against prisoners and some have been sentenced to jail in the past year.