EU: Golan Heights do not belong to Israel 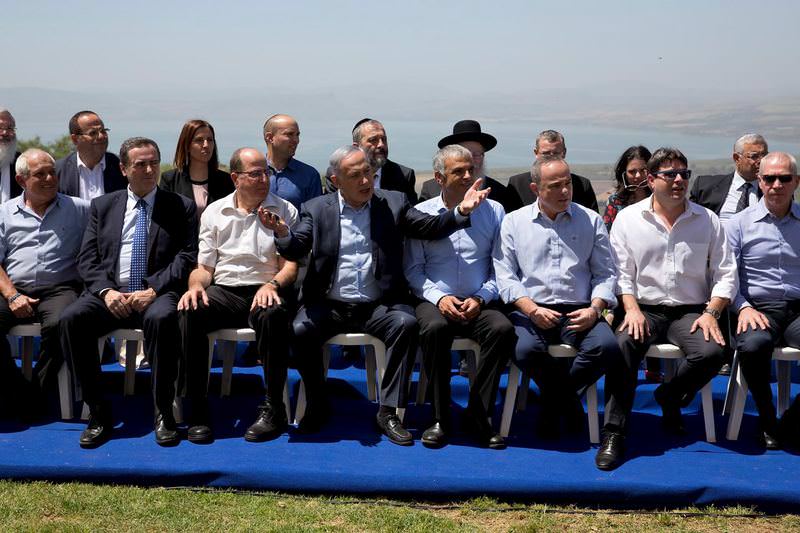 Israeli Prime Minister Benjamin Netanyahu, center, poses with ministers prior to the weekly cabinet meeting in the Israel-controlled Golan Heights.
by Daily Sabah with Wires Apr 21, 2016 12:00 am

After the U.S., Germany and the Arab League, the European Union has said it does not recognize the Golan Heights as part of Israel although Israeli Prime Minister Netanyahu, however, vowed that the region will remain Israel's forever

EU diplomatic chief Federica Mogherini stressed that the European Union does not recognize Israeli sovereignty over the Golan Heights, after Prime Minister Benjamin Netanyahu said the annexed territory would "forever" remain in his country's hands. "The EU recognizes Israel within its pre-1967 borders, whatever the government's claims on other areas, until a final settlement is concluded," Mogherini said. "And this is a common consolidated position of the European Union and its member states," she added ahead of a meeting in Brussels for international donors supporting the Palestinian economy. Netanyahu's cabinet on Sunday held its first meeting in the Golan Heights, territory seized from Syria in the 1967 Six-Day War. "The Golan Heights will remain in the hands of Israel forever," Netanyahu said at the start of the cabinet meeting, in comments broadcast on public radio. Bashar al-Jaafari, Syria's envoy to the United Nations, denounced the meeting as an "irresponsible provocation", while Arab League chief Nabil al-Arabi called it an "escalation". Israel seized 1,200 square kilometers of the Golan Heights from Syria in the Six-Day War and later annexed it, a move never recognized by the international community.

Not only the EU but also Arab League, Germany and the U.S. rejected that Golan belongs to Israel. On Monday, the U.S. said that it does not recognize Golan as part of Israel. U.S. State Department spokesman John Kirby said that the Obama administration does not consider the Golan Heights to be part of Israel. "The U.S. position on the issue is unchanged," Kirby said at a daily media briefing at the State Department in Washington. "This position was maintained by both Democratic and Republican administrations. Those territories are not part of Israel and the status of those territories should be determined through negotiations." German Foreign Ministry spokesman Martin Schaefer said "it's a basic principle of international law and the U.N. charter that no state can claim the right to annex another state's territory just like that." Arab League chief Nabil al-Arabi, the secretary general of the pan-Arab bloc headquartered in Cairo, said Netanyahu's statement "was a new escalation that represents a brazen violation of international law."