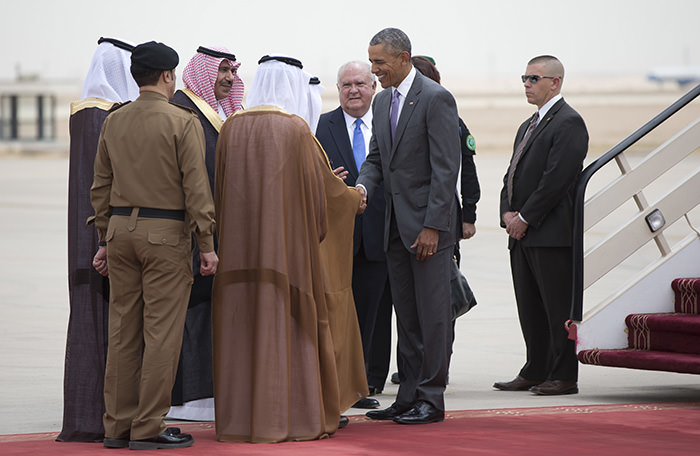 U.S. President Barack Obama arrived in Saudi Arabia's capital Riyadh on Wednesday for a summit meeting with King Salman and his fellow Gulf Arab leaders. Obama met with Salman late Wednesday and with the heads of the other Gulf Cooperation Council (GCC) countries, including Kuwait, Qatar, Bahrain, the United Arab Emirates and Oman, on Thursday.

Obama's fourth and likely last visit to the world's top oil exporter has been overshadowed by the Gulf Arab exasperation with his approach to the region, and doubts about Washington's commitment to their security. However, his meetings come in the shadow of disagreements that have further cooled an already strained atmosphere between the old allies ahead of the talks.

Meanwhile, contrary to Obama's last visit, the president was welcomed at the airport by Prince Faisal bin Abdul-Aziz, the governor of Riyadh, after walking down a red carpet on the stairs of Air Force One, which was considered as a breakaway from the diplomatic protocol traditionally followed by Saudi officials. The Saudi state news channels also did not broadcast Obama's arrival to Riyadh. Both moves were interpreted as a result of the recent tensions in relations between the U.S. and Saudi Arabia.

Obama later met privately at his hotel with Abu Dhabi's crown prince Sheikh Mohammed bin Zayed al-Nahayan and discussed the need to find a political settlement for the Yemen conflict, and to head off the "actions of potential spoilers" for Libya's nascent government.